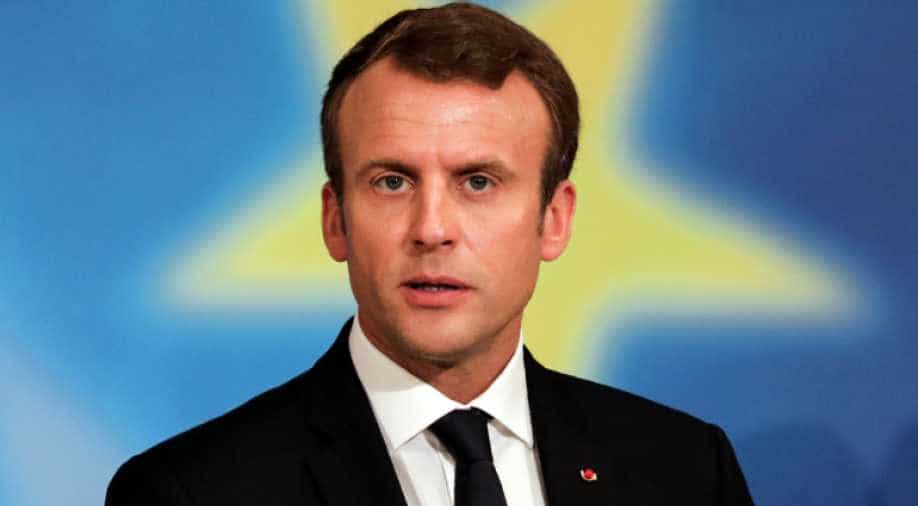 Macron said he was "standing by the substance" of his remarks - which were made in conversation with a regional official - and would have chosen his words differently in a more formal context. Photograph:( Reuters )

French President Emmanuel Macron came under fire after a remark directed against union activists fuelled accusations from opponents that he shows contempt for disgruntled workers.

The pro-business president made the comment Wednesday while visiting the central town of Egletons, referring to trade unionists who clashed with police during a rally against layoffs at the region's GM&S auto parts plant.

"Some, instead of stirring up shit, would be better off looking for work" at a foundry in Ussel, Macron said. The foundry, 140 kilometres (85 miles) from the auto plant, is struggling to find workers.

Macron said Thursday that he was "standing by the substance" of his remarks -- which were made in conversation with a regional official -- and would have chosen his words differently in a more formal context.

Government spokesman Christophe Castaner conceded to BFMTV the choice of language used was "surprising coming from the mouth of a president of the republic."

"The French use these words all the time," said Castaner, adding that Macron had aimed the comment at a union delegation which had "decided to disrupt the visit.

Macron spokesman Bruno Roger-Petit insisted the president was not aware he was on camera at the time.

Macron's comment follows several others seen as dismissive of ordinary people or critics, contributing to a steep drop in popularity for the 39-year-old centrist since his election in May.

Last month, days before a union-led protest against his flagship labour reforms, Macron said he would not back down "to slackers, cynics and extremists".

His words became a rallying cry for protesters who coined slogans such as "Slackers of the world, unite!"

He had previously raised eyebrows by drawing a distinction between "people who succeed and people who are nothing".

"Macron does it again," the opposition Socialist Party said in a tweet on Wednesday, calling on the president to "watch his language and respect the French people".

A lawmaker of the hard-left France Unbowed party, Adrien Quatennens, said Macron "doesn't know what it means to look for work".

Secretary general of the liberal centre-right Republicans Bernard Accoyer said Macron was "president of all the French and the first requirement is respect for all our compatriots whoever they may be -- and in particular those who are in difficulty."

Accoyer's party colleague Christian Jacob accused Macron of "arrogance" and of being a leader "who cannot take the least challenge."

Macron has sought to restore lost prestige to the presidency, hosting events in grandiose settings such as the former royal palace in Versailles and likening his role to that of Jupiter, king of the Roman gods.

The former investment banker's ambitious agenda includes labour reforms pushed through by decree, with critics seizing on his use of executive orders as an example of an autocratic leadership style.

Macron is also planning major tax cuts for the wealthy, forcing him to fend off accusations that he is a "president of the rich".

France's youngest president sees the tax cuts as essential to spurring investment and stemming the exodus of millionaires such as actor Gerard Depardieu and ageing rocker Johnny Hallyday.

Wednesday's remark "further alienates the president by bolstering the image of heavy-handedness and indifference to the least fortunate," said Emmanuel Riviere of the Sofres polling institute.

Political scientist Jerome Sainte-Marie told AFP it "was not very good in terms of popularity, but that won't prevent him from passing reforms -- he has overwhelming power."

Macron insists he has a mandate for change after his presidential win was followed by a thumping parliamentary victory for his Republic on the Move (LREM) party.

Three demonstrations over his labour reforms failed to mobilise the huge crowds that marched against his Socialist predecessor Francois Hollande's workplace changes.