How Singapore has kept the coronavirus off campus 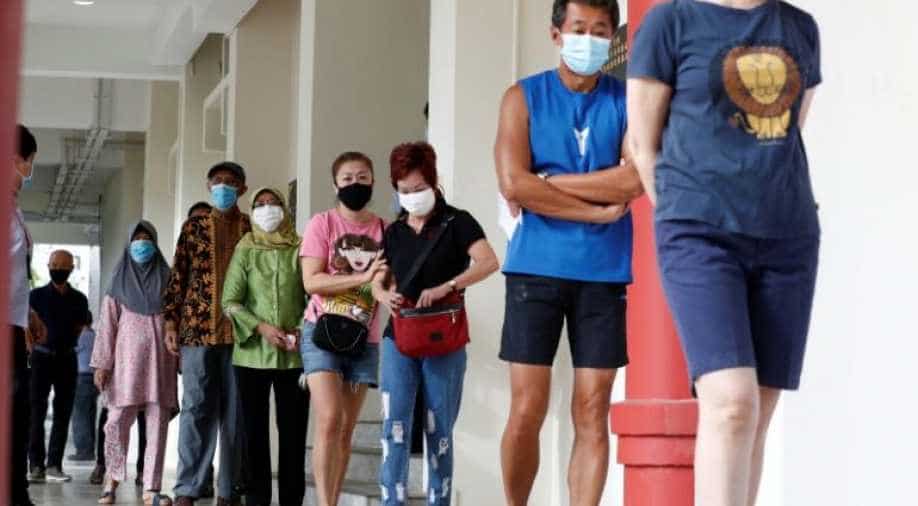 People standing in a queue to vote in Singapore Photograph:( Reuters )

Following the government’s lead, universities in Singapore, a semi-authoritarian city-state of almost 6 million people, have taken a top-down approach to managing the coronavirus. The result: Since the start of the pandemic last year, not one person has been found to have contracted the virus at any of Singapore’s three major universities

Every day, Tan Eng Chye, president of the National University of Singapore, scans his online dashboard to see how crowded the cafeterias are.

If the real-time map shows that one cafeteria is too packed, he has administrators send out an advisory to avoid it and to remind students that there are campus-run food delivery services, free of charge.

Following the government’s lead, universities in Singapore, a semi-authoritarian city-state of almost 6 million people, have taken a top-down approach to managing the coronavirus. The result: Since the start of the pandemic last year, not one person has been found to have contracted the virus at any of Singapore’s three major universities.

While Singapore’s universities have benefited from a generally low caseload in its broader population, their experience and stringent measures stand in stark contrast to many campuses across the United States. A number of U.S. universities experienced an explosion in cases almost as soon as students returned last fall.

The National University of Singapore, or NUS, describes its strategy as containment, decongestion and contact tracing. The university has harnessed technology to enforce social distancing measures, assigned students to different zones on campus and imposed tough penalties for flouting the rules. Like some U.S. colleges, it is testing people extensively and even sifting through sewage for traces of the virus.

The goal, Tan said, “is to make sure there are no infections” among the students, faculty and staff members at NUS.

“We are very mindful that we are a big population of 50,000 just on campus, and whatever we do also has a bearing on the larger community outside the campus,” he said in an interview.

Kathlyn Laiu, a 19-year-old freshman who lives on the NUS campus, said the only party she attended last year was on Zoom, for Halloween. She spent her first semester eating most meals in her dorm room, counting the number of people in the dormitory lounge before entering, and reporting her temperature twice a day through a university app.

The zoning restrictions made it complicated for students to access banking services, eat in their favorite cafeterias or organize meetings, though they could meet friends and classmates off campus. A petition last October to lift the restrictions was signed by more than 800 students.

“I think it’s quite hard to live with, honestly,” Laiu said. “It’s a very different idea of college.”

One major reason for Singapore universities’ success in keeping the virus at bay, experts say, is the aggressive pandemic response in society at large. The government offers free testing and medical care to all citizens and long-term residents, and it quickly isolates infected people and traces their contacts. It punishes those found to have violated restrictions, including by deporting foreign nationals and revoking work passes.

“We have not had any outbreak in the universities because the government has taken very good care of the policies,” said Rajesh Krishna Balan, an associate professor of information systems at Singapore Management University.

Singapore has had almost 59,000 coronavirus cases and 29 deaths, according to a New York Times database. Of those cases, 93% were among migrant workers from South Asia and elsewhere, whose dormitories were the site of severe outbreaks that caught the government off guard.

Since those outbreaks were extinguished last fall, Singapore has averaged fewer than one locally transmitted case each day. On Dec. 28, the country began its final phase of reopening, though migrant workers continue to live under harsher restrictions than the rest of the population.

As reopening proceeds, Singapore Management University is planning more face-to-face classes, while NUS has lifted its zoning restrictions. But the universities are also maintaining caution. Nanyang Technological University said it would offer free testing to all students returning to the dormitories this semester.

David Tan, vice dean of academic affairs at the NUS faculty of law, noted that students at Harvard Law School had vocally opposed plans to hold classes online last fall. In contrast, he said, his students did not utter a word of protest.

“In Singapore, we just roll with it,” he said. “I think we are blessed with rather compliant students.”

Another advantage is that unlike in the United States, most students in Singapore do not live on campus. Those who do must comply with more restrictions, such as limits on the number of visitors to their dormitories. Singapore also does not have fraternities and sororities, which on U.S. campuses have hosted large parties that led to major outbreaks.

“You just wouldn’t see 500 people at a party with loud music and drunk in Singapore,” said Dale Fisher, a professor in the NUS Department of Medicine. “It probably wouldn’t even happen in normal times.”

Olyvia Lim, a senior at Nanyang Technological University, said she and her classmates were baffled by reports about U.S. college students partying amid a pandemic.

“We all said, ‘Why would they risk themselves to do such a thing?’” Lim said. “It’s a bit hard to believe because we are of similar ages, but I think it’s culture. They are all about freedom, but when the government here says, ‘Wear a mask,’ we all do.”

Students say they comply with the rules because of the threat of punishment. Some of their classmates have been evicted for hosting visitors.

“The consequences are severe, so people are scared,” said Fok Theng Fong, a 24-year-old law student.

Things do slip through the cracks. At NUS’ U-Town campus, a popular section of the university with several restaurants and cafes, students said it was clear that many had come from other zones without permission. Several admitted that they did not faithfully report their temperatures.

The project, developed by Michael Chee of NUS and Balan of SMU, went live in April as a way to monitor crowds “as passively as possible and with minimum inconvenience,” Chee said.

NUS now encourages students and staff members to check an app with a platform called CrowdInsights, which was developed by administrators at the university. But more important than technology, Chee said, is the attitude among students that the collective good matters.

“We don’t have this militant ‘We must have freedom’ approach that the West has,” he said. “The technology supports the mission, but it’s useless if people don’t have that ethos and culture to apply it.”

At NUS, many students said they put up with the restrictions because they recognized the need to safeguard public health.

Valencia Maggie Candra, a 20-year-old freshman who returned to Singapore in September from her native Indonesia, said she “definitely felt a difference” in people’s attitudes.

Candra said she was studying alone in her dormitory lounge in November when a security guard came in and told her to wear her mask. She readily complied.

“Everyone is just relatively more socially responsible,” she said. “Even though the rules are not 100% followed, everyone still respects it.”