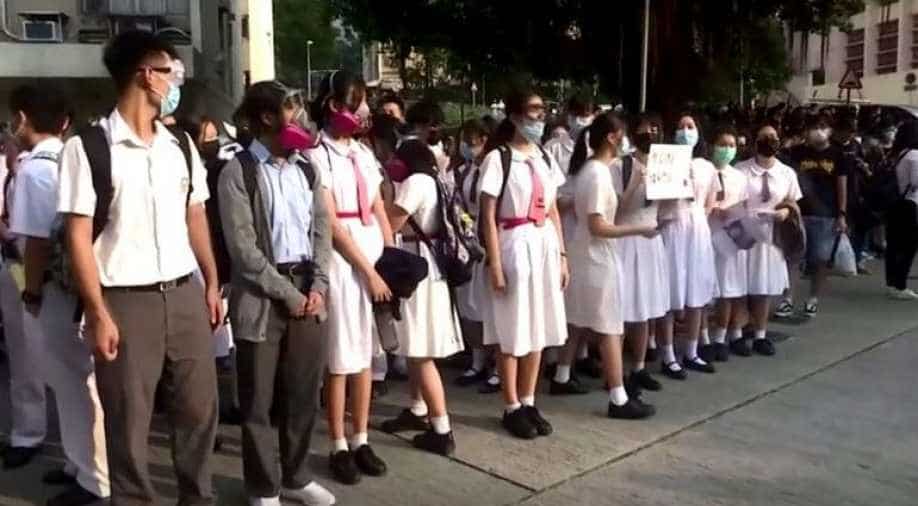 A few thousand demonstrators mustered in a park and then began marching through the city's commercial district.

Spontaneous flash-mob rallies broke out in Hong Kong on Wednesday as anger mounted over police shooting a teenage protester who attacked officers in a dramatic escalation of the violent unrest that has engulfed the territory for months.

A few thousand demonstrators, including office workers in shirts and suits, mustered in a park and then began marching through the city's commercial district in an unsanctioned rally, chanting anti-police and anti-government slogans.

Hours earlier, hundreds of students staged a sit-in at the school of 18-year-old Tsang Chi-kin, who was shot in the chest by a policeman as he and a group of masked protesters attacked officers with umbrellas and poles.

Hong Kong was battered by the most sustained political clashes of the year on Tuesday as China celebrated 70 years of Communist Party rule with a massive military parade in Beijing.

The spiralling violence underscored seething public anger against Beijing's rule and shifted the spotlight from China's carefully choreographed birthday party, which was designed to showcase its status as a global superpower.

Running battles raged for hours across multiple locations as hardcore protesters hurled rocks and petrol bombs. Police responded for the most part with tear gas, rubber bullets and water cannon.

Police said the officer fired at Tsang because he feared for his life on a day that saw his colleagues fire five warning shots from their pistols throughout the city.

"In this very short span of time, he made a decision and shot the assailant," police chief Stephen Lo said.

But protest groups said the officer charged into the melee with his firearm drawn and condemned the increasing use of live rounds.

"The people of Hong Kong are sick and tired of having mere words of condemnation as their only shields against lethal bullets and rifles," a masked protester said at a press conference near Tsang's school.

The shooting was captured on video that quickly went viral.

Opinion towards the shooting has largely cemented along ideological divides with pro-democracy activists condemning the police and establishment figures calling it a justified use of force.

Tsang, who was filmed trying to strike the officer with a pole as he was shot, was taken to a nearby hospital in a critical condition but authorities said his condition had since improved.

A friend and classmate of Tsang, who gave his first name Marco, said the 18-year-old was a keen basketballer who was infuriated by sliding freedoms in Hong Kong and the police response to the protests.

"If he sees any problems or anything unjust, he would face it bravely, speak up against it, instead of bearing it silently," Marco told AFP.

Police said 25 officers were injured in the National Day clashes, including some who suffered chemical burns from a corrosive liquid that was thrown at them by protesters. The liquid also wounded some journalists.

Hospital authorities said more than 70 people were admitted on Tuesday. Police made some 160 arrests throughout the day.

On Wednesday, 96 protesters arrested during clashes with police on Sunday appeared in court charged with rioting, according to court documents. Their ages ranged from 14 to 39.

The majority were students in their early twenties but other occupations listed included a waitress, a teacher, a doctor, an advertising executive and a cook.

Hong Kong's protests were ignited by a now-scrapped plan to allow extraditions to the mainland.

But after Beijing and local leaders took a hardline they snowballed into a wider movement calling for democratic freedoms and police accountability.

The sentiment is hardening on all sides.

The protest movement's main demands are an independent inquiry into police actions, an amnesty for those arrested and universal suffrage.

But Beijing and Lam have said they are unwilling to meet those demands.