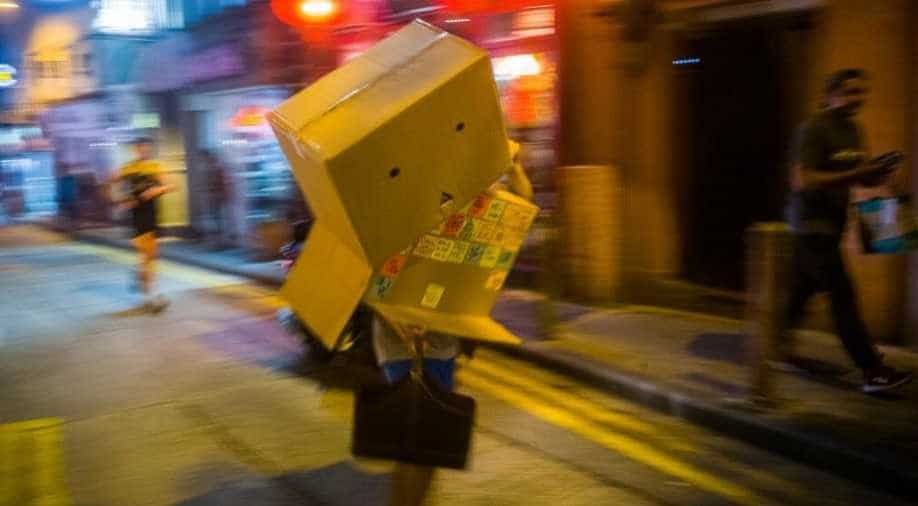 Online forums used to organise the largely leaderless movement are encouraging supporters to descend on one of the city's most popular party streets while police have said they will ramp up spot checks and searches.

Online forums used to organise the largely leaderless movement are encouraging supporters to descend on one of the city's most popular party streets while police have said they will ramp up spot checks and searches.

The move was seen as a watershed legal moment for the city since its 1997 return by Britain to China -- but the ban has done little to stop the protests or dissuade people from wearing masks.

Protesters have been circulating downloadable face masks for Thursday evening.

One shows Chief Executive Carrie Lam as Batman's nemesis The Joker, another has Secretary for Justice Theresa Cheng looking like Guy Fawkes.

There is also a mask that blends Chinese president Xi Jinping's face with Winnie the Pooh -- AA Milne's "bear of little brain" who is frequently used to lampoon the authoritarian leader and is routinely censored on the mainland as a result.

"This is not a celebration or a party," organisers of the unsanctioned protest wrote on a messaging group. "We are using Halloween to express our demands and dissatisfaction."

Apple Daily, the city's most openly pro-democracy newspaper, also printed a front-page on Thursday with a cutout mask of a policeman and a headline suggesting officers were now "more scary than ghosts".

A police source told AFP their presence would be ramped up around Lan Kwai Fong, a street packed with nightclubs that traditionally holds the city's largest Halloween party.

Officers would demand people remove their masks or facepaint if they were suspected protesters, the source added.

A major subway station nearby will also close at 9 pm while a theme park on the other side of the main island said it was cancelling its annual Halloween-themed party.

Earlier on Thursday activists went to court to challenge the emergency law.

"This is a duel between the rule of law and totalitarianism," lawmaker Dennis Kwok told reporters outside the High Court at the start of a two-day hearing.

The sweeping 1922 emergency law was passed in a single day by then colonial master Britain to deal with striking workers and allows the city's leader to make "any regulations whatsoever" in a time of emergency or public danger.

It was last used by the British in 1967 to help suppress Maoist-backed leftist riots that raged for nearly a year and killed some 50 people.

Lam's use of the law was controversial because it bypassed the Legislative Council, the partially-elected chamber that approves Hong Kong's laws.

Critics said the move also undermined the city's reputation for being a dependable business and legal hub at a time of growing concern over Beijing's control of the city.

The legal challengers also argue it contradicts the city's more recently passed Bill of Rights which states that restrictions on core freedoms can only be justified if there is an emergency or the "life of the nation" is at stake.

When Lam announced the mask ban in early October she publicly declared that the city was not in a state of emergency.