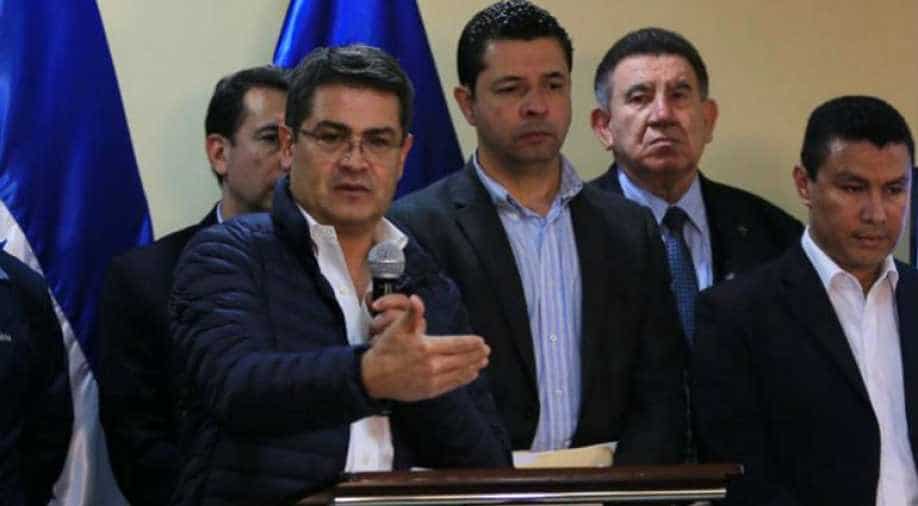 Honduran President Juan Orlando Hernandez was declared on Sunday the winner of a heavily disputed presidential election held three weeks ago, despite mounting protests and opposition claims of fraud.

Electoral authorities made the announcement the day that Hernandez's leftist opponent, Salvador Nasralla, departed for the United States to highlight what he said was ballot tampering in the November 26 poll.

The declaration could deepen a spiral of violence that has occurred since the election, as anti-Hernandez protesters and police have squared off repeatedly.

Police have counted three deaths in the unrest. But the opposition says 20 people have died, and Amnesty International registered 14 fatalities.

The ballot was deeply contentious.

Hernandez, 49, stood for re-election against Nasralla, a 64-year-old former TV presenter, despite a constitutional ban on presidents having more than one term.

His conservative National Party said that rule was scrapped by a 2015 Supreme Court ruling.

But the opposition insists ballots were tampered with after the election, and says unusual breaks in the count that dragged out the tally over more than a week were suspicious.

The leftist opposition alliance said it was not recognizing Hernandez's win, and called for protests.

International observers also said they noted "irregularities."The Supreme Electoral Tribunal had previously declined to name a victor, despite saying that its count of the ballots showed a slight margin in favor of Hernandez: 43 percent to 41 per cent for Nasralla.

But it had to do so by a December 26 deadline, or risk the entire election being invalidated.

Nasralla, the candidate of the leftist Opposition Alliance Against the Dictatorship, is standing firm on his claim that he won the election, and that only fraud made it look like Hernandez had the edge.

He is insisting the entire vote be held again, with greater international scrutiny.

Ex-president Manuel Zelaya, part of the opposition alliance, said the armed forces and police should recognize Nasralla as the winner, as he said the Honduran people had.

"This election is null and void; we are not respecting it," Zelaya told reporters.

On Sunday, Nasralla left for the United States to call attention to the fraud he said was perpetrated.

He was to meet the head of the Organization of American States, Luis Almagro, officials from the US State Department and human rights groups.

The US visit "may be decisive in finding a solution to the crisis brought about by fraud and to restore calm to the nation," he told journalists in Tegucigalpa before leaving.

Going into the election, the United States gave implicit support to Hernandez, who has presided over a crackdown on vicious gangs that are rampant in Honduras.

The country is beset by violence, poverty and corruption and provides many of the undocumented migrants headed to the United States.

Hernandez himself was in mourning over the death of his 51-year-old sister in an air force helicopter crash on Saturday that also killed five others.

Hilda Hernandez had served as the president's communications minister.