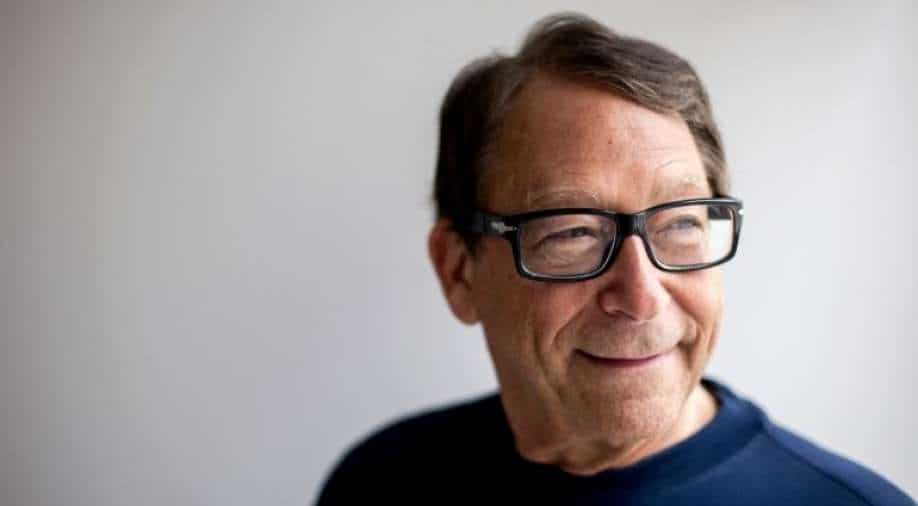 Weitzman is selling the world’s most valuable single stamp, the 1856 One-Cent Magenta from British Guiana, which he bought in 2014

On the day in 1918 when the Postal Service began selling stamps with an image of a newfangled airplane, a 29-year-old stockbroker’s clerk and stamp collector went out on his lunch hour to buy some. He emerged from the nearest post office with a single sheet of 100.

Soon federal agents were hunting for him and demanding them back.

The airplane on the stamps was — uh-oh — upside down. The clerk had stumbled across one of the most celebrated stamp mistakes in history, the famously misprinted Inverted Jenny.

A block of four stamps from that single sheet — a singular quartet because it still bears the plate number — will go on display, by appointment, at Sotheby’s in Manhattan Thursday in preparation for an auction June 8.

The quartet, known to collectors as the “plate block,” is one of three rarities owned by Stuart Weitzman, the designer and entrepreneur known for creating strappy gladiator sandals, thigh-high boots and other shoes that have been worn by everyone from Kate Moss in his advertisements to Kate Middleton in paparazzi photos.

The other two items in the auction are also marketed with superlatives. Weitzman is selling the world’s most valuable single stamp, the 1856 One-Cent Magenta from British Guiana, which he bought in 2014, and one of the world’s most valuable coins, a $20 U.S. gold piece that was minted in 1933 and is known as a double eagle. Weitzman paid $7.6 million for it in 2002, at the time the highest price any coin had ever sold for.

Weitzman, 79, said that owning the three items had fulfilled a boyhood dream of collecting that began as a rookie with stamps and coins. As an adult, he said several years ago, he focused on pursuing one-of-kind items with lasting value. Now, though, he said, it was time to plan ahead.

“No one takes a U-Haul to the cemetery,” he said. “We have to figure out what to do with all this stuff.”

“The reason I’m doing the selling is my children don’t want to inherit these items,” added Weitzman, whose former company has been owned by the luxury fashion house Coach since 2015. “They say, ‘It’s great to do with them what you did, but we don’t want to have to worry about them, fuss with them, protect them, figure out what to do with them.’ ”

The money from selling the three items — as much as $37 million, based on Sotheby’s presale estimates — will go to charitable ventures, including the Weitzman Family Foundation.

Richard Austin, head of books and manuscripts at Sotheby’s, said it was “very difficult not to use hyperbole” in describing any one of the three. “For one person to accumulate all these treasures is unusual,” he said. “It’s a childhood collecting fantasy that he was able to make come true. I don’t even know if Stuart appreciates how unusual this is.”

Robert G. Rose, chairman of the nonprofit Philatelic Foundation, which authenticates stamps, was similarly impressed. “You’re talking about two of the most iconic pieces in all of Stamp World, all of philately,” he said. “And of course there’s the coin. It’s one of a kind as well.”

Sotheby’s expects to sell the Inverted Jenny plate block for $5 million to $7 million and the double eagle for $10 million to $15 million.

Weitzman’s identity as the owner of the double eagle is being revealed here for the first time. Sotheby’s never revealed the buyer after the 2002 sale, and even internally some Sotheby’s employees referred to the purchaser simply as “Mr. Big.” There was speculation that the owner was Bill Gates or Steve Jobs. The coin was on display at the New-York Historical Society from 2013 until last month, but the museum merely labeled it “Property of a Private Collector.”

The double eagle is unique: No other double eagles can be privately owned. The 445,500 that were made were supposed to be melted down. But 20, including Weitzman’s, were stolen from the mint. Some ended up in the hands of a Philadelphia jeweler and coin dealer who sold nine of them in the 1940s. In 2004, when his daughter discovered 10 others in his safe deposit box, the government challenged her claim of ownership, and won. The 10 were taken to Fort Knox, leaving Weitzman’s double eagle the only one from 1933 that can legally be sold.

The One-Cent Magenta is also unique — apparently the others printed with it were discarded — and is considered by some collectors to be the “Mona Lisa” of stamps. In the 1920s, it was owned by a textile entrepreneur who was said to have outbid King George V when he bought it for $32,250.

Weitzman purchased it from the estate of a later owner, John E. du Pont, an heir to the du Pont chemical fortune who had acquired it in 1980, before he went to prison for the murder of Olympic wrestler and coach Dave Schultz. The killing served as the basis for the 2014 film “Foxcatcher.”

Like the One-Cent Magenta’s past owners, Weitzman left his mark, a stiletto heel, on the back of the tiny stamp. Among stamp collectors, it is not unusual for the owners of great rarities to put their initials or a symbol on backs of the stamps. Purists cringe, but many philatelists say that doing so — carefully, and tinily — does not damage a stamp or detract from its value.

As for the Inverted Jennies, there is only one plate block, the corner of the original sheet with the number identifying the plate used on each page of stamps at the Bureau of Printing and Engraving. The sheet of 100 was broken up by Col. Edward H.R. Green, a fanatical collector whose mother was the stingy financier known as the “Witch of Wall Street.” The other 96 stamps on the sheet have been sold one by one, but the four adjacent to the plate number have remained intact.

Green was the third owner of the sheet. For the first owner — William T. Robey, the stockbroker’s clerk — it was the lucky find of a lifetime. He paid $24, the face value of the 100 stamps, when he went to a Washington post office on the day they went on sale.

He knew what he had as soon as the postal clerk handed him the sheet. He rushed out of the post office and eluded postal inspectors who came looking for him, trying to get back a red-and-blue misprint that, to their bosses, was an embarrassment.

Apparently a printing plate had been flipped in the two-colour printing process. The image of the plane, the Curtiss JN-51, nicknamed Jenny and set to carry the first loads of mail by air, came out upside down. Any other sheets printed that way were caught and destroyed at the Bureau of Printing and Engraving. But Robey’s sheet slipped by inspectors, and out into the world.

Robey soon turned a profit of $14,976, selling the sheet of 100 stamps for $15,000, enough to buy a new car, which he is said to have driven through the wall of the garage that came with his new house. The dealer who purchased them promptly turned a profit of $5,000 by marking up the price $20,000 for Green. The plate block has changed hands several times since then, most recently when Weitzman acquired it in 2014.

For years, Weitzman kept quiet about his collecting, not wanting the publicity. In 2012, 10 years after he had bought the double eagle, it was the centerpiece of a display at the Federal Reserve in Lower Manhattan. David Tripp, special consultant to Sotheby’s on coins, did not know who owned the coin when, at the opening of the exhibit, he was approached by David N. Redden, the Sotheby’s executive who had handled the auction in 2002. Redden had two people in tow.

“David said, ‘I’ve got a friend here with his daughter. His name is Stuart. Tell him about the coin,’” Tripp recalled.

Tripp, unsuspecting, went on to describe the particulars of the coin to the man who owned it.

“Years later,” Tripp said, “when David told me Stuart Weitzman was the owner, Stuart Weitzman the great designer of shoes, I clicked on Google and said, ‘I’ve met that guy before."