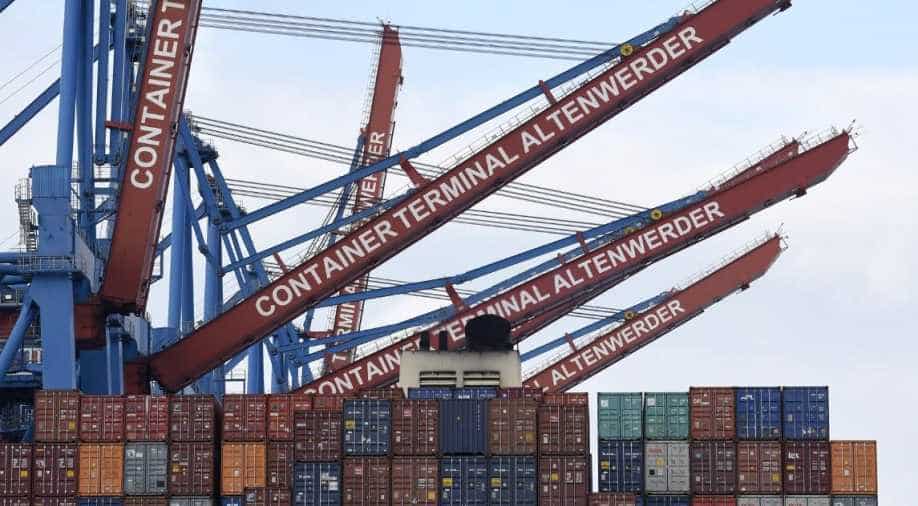 FILE PHOTO: Containers are seen at the loading terminal Altenwerder in the harbour of Hamburg Photograph:( Reuters )

Strong German exports to the United States helped Europe's largest economy to avoid a recession in the third quarter, data showed on Thursday, as companies benefitted from a weaker euro and trade diversion linked to the US - China tariff dispute.

Germany's export-reliant economy avoided slipping into recession in the third quarter as consumers, state spending and construction drove a 0.1 per cent quarterly expansion. Exports also fared better than in the previous three months.

Overall, exports grew 1.7 per cent year-on-year in the third quarter after a 1.3 per cent decline in the second, with United States and France remaining Germany's two biggest customers, data compiled for Reuters from the Federal Statistics Office showed.

"Exports to the US are running smoothly," Gabriel Felbermayr, president of the Kiel Institute for the World Economy, told Reuters, adding that the euro had depreciated by 14 per cent against the US dollar since the beginning of 2018. A weaker euro makes German exports less expensive.

"The strong dollar is one of the macroeconomic side effects of Trump's trade policy towards China. It leads to trade diversion," Felbermayr said. That means the United States is increasingly buying goods from the European Union and Germany as tariffs make competing imports from China more expensive.

The United States and China are locked in a trade war triggered by Trump. Both countries have levied punitive duties on hundreds of billions of dollars worth of each other's goods, roiling financial markets and threatening global growth.

But Felbermayr cautioned that the uncertainty created by Trump's trade policy in the medium term will lead to stronger production of German companies in the United States, which will weaken exports.

"The relocation of jobs is already taking place but is not yet visible in the export figures," he said.

The strong sales to the United States and France helped Germany to offset stagnating exports to China. They edged up only 0.3 per cent year-on-year in the third quarter, compared with annual export growth rates of 1.8 per cent in the second quarter and 6.3 per cent in the first.

That suggests Germany can no longer rely on Chinese demand to fuel its export machine and with it, well-paid manufacturing jobs and tax revenues at home.