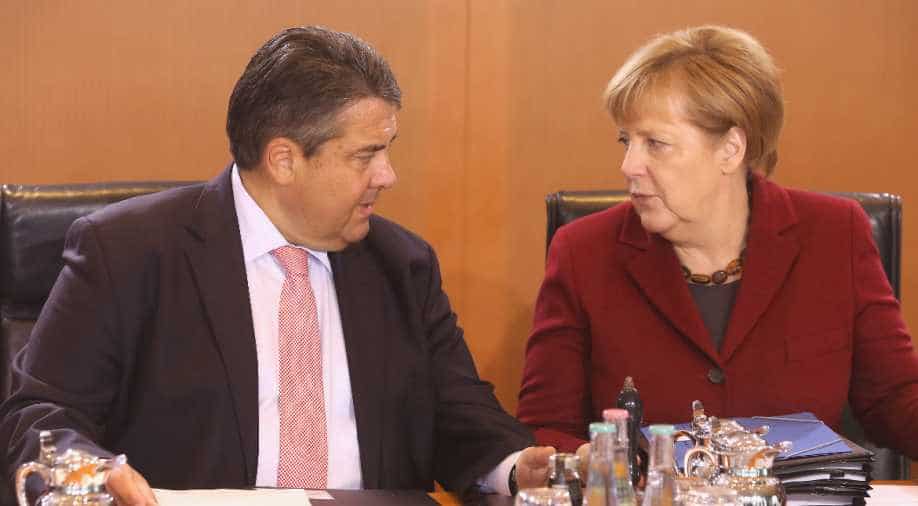 Merkel, 62, announced in November that she would stand for a fourth term in a general election expected this September. In photo: Sigmar Gabriel (SPD, L) and German Chancellor Angela Merkel (CDU) on October 19, 2016. Photograph:( Getty )

Merkel, 62, announced her candidature for a fourth term in November last year.

An official announcement is not expected until January 29.

"The SPD will decide on its candidate for chancellor on Jan. 29," a spokesman for Gabriel said, Reuters reported.

The paper said that former chancellor Gerhard Schroeder had encouraged Gabriel to stand and clearly state that he wanted the top job.

Some party members had hoped that the former president of the European Parliament Martin Schulz would step up for the role.

The SPD executive board denied in a tweet that a decision had been taken.

"We are pleased about the media interest in the SPD! But it is just speculation about the chancellor issue. The fact remains: we will decide on January 29," it said.

Although Merkel had received criticism for her liberal immigration policy, polls show the Christian Democrats (CDU) leads with around 37 per cent support, followed at a distance by the SPD with about 20 per cent. An insurgent anti-immigration party, the AfD, is currently polling at around 15 per cent, AFP reported.