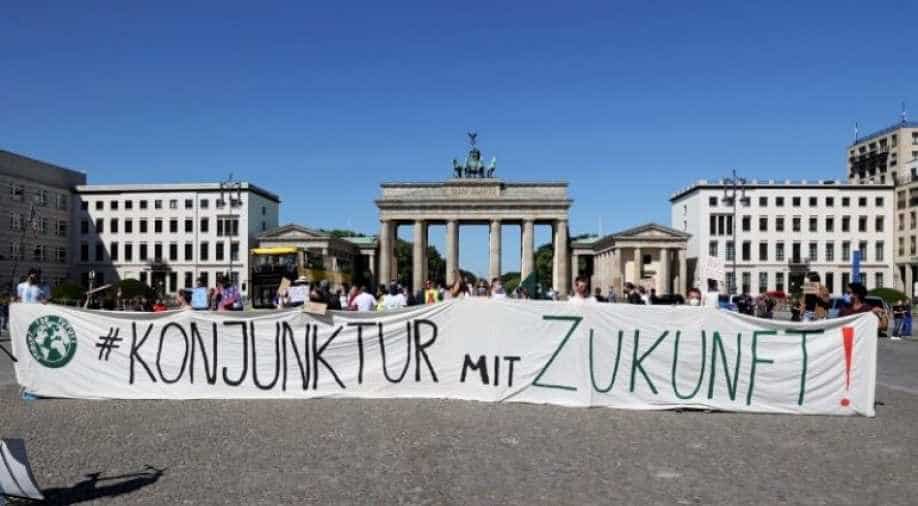 Protesters hold a banner reading "Economic activity with future!" during a demonstration against the planned state aid for Germany's automobile industry, amid the spread of the coronavirus disease (COVID-19), in front of the Brandenburg Gate in Berlin, Ge Photograph:( Reuters )

Parties in German Chancellor Angela Merkel's coalition wrestled on Tuesday over final details of a huge stimulus package to aid recovery from the COVID-19 pandemic, including whether cash incentives to buy new cars should exclude combustion engines.

Senior members of Merkel's conservative CDU/CSU bloc and the co-governing Social Democrats (SPD) planned to negotiate until 11 p.m. (2100 GMT) on Tuesday and resume on Wednesday after a regular? cabinet meeting, a SPD party spokeswoman said. Initially, a final deal was expected on Tuesday.

Also read: WHO warns against overusing antibiotics amid pandemic, says it will lead to more deaths

"It will take a long time and probably will not end today," SPD co-leader Norbert Walter-Borjans told reporters ahead of the talks as he entered the chancellery, adding that one area of contention was help for lower- and mid-income households.

"And there is a big topic that we need to talk about, namely that from our point of view, there cannot be a purchase incentive for cars with combustion engines," he added.

The CDU/CSU is focused more on helping companies and high earners hit hard by the pandemic.

The fiscal stimulus fund, coming on top of an unprecedented 750 billion-euro ($837 billion) rescue package agreed in March, will include measures worth up to 100 billion euros, government and coalition sources have said.

The package is meant to help companies and employees rebound more quickly from a pandemic that is expected to plunge Europe's largest economy into its deepest recession since World War Two.

Among the proposals on the table are cash handouts for families to boost consumption, extra relief for municipalities struggling with lower tax receipts, and further funds for companies with fewer than 250 employees.

Also read: Report reveals collective negligence by China and WHO in dealing with the coronavirus pandemic

Economy Minister Peter Altmaier, of the CDU, said the package could encompass a one-off splurge of 5 billion euros for families with children. He also hoped the deal would include measures to foster more digitisation.

However, he added that "some things may not be completely settled tomorrow...We will take things step by step."