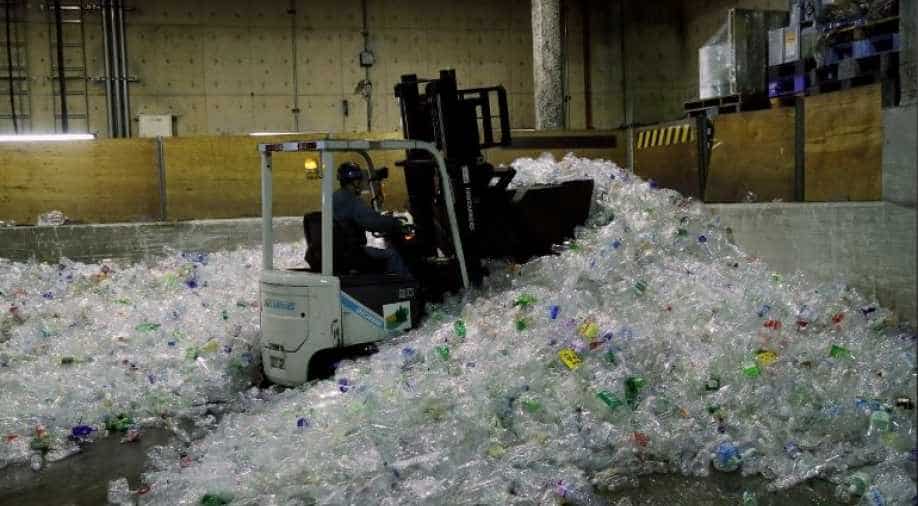 The EU has voted to outlaw 10 single-use plastic items, including straws, forks and knives, by 2021. It has also set targets for all plastic packaging, the top source of plastic waste, to be recyclable by 2030.

Japan wants to make reducing the glut of plastic waste in the oceans a priority at the Group of 20 summits it is hosting this month as governments around the world crack down on such pollution.

Images of plastic debris-strewn beaches and dead animals with stomachs full of plastic have sparked outrage, with many countries, including more than two dozen in Africa, banning plastic bags outright.

The EU has voted to outlaw 10 single-use plastic items, including straws, forks and knives, by 2021. It has also set targets for all plastic packaging, the top source of plastic waste, to be recyclable by 2030.

Such moves are setting up a showdown with the oil industry, which is pouring billions into new facilities to produce more plastic and other petrochemical products, particularly in Asia.

"If the world goes the direction of European targets, some markets can go from high growth to low growth or no growth. Profits could suffer," said Jeff Brown, president of energy consultancy FGE in Singapore.

Tackling plastic pollution has been less of a priority in Asia, which is the world's biggest producer of the material - and its waste.

Prime Minister Shinzo Abe of Japan, which is hosting the G20 summit, says he wants his country to lead the world in reducing marine plastic trash, including developing biodegradables and other innovations.

The June 28-29 meeting in Osaka, assembling 20 major economies, including China, Brazil, France and the United States, won't yield an agreement on targets or concrete steps, two officials involved in preparations told Reuters, speaking anonymously because they were not authorised to speak to the media.

A more likely outcome is for G20 environment ministers, gathering this weekend in the mountain town of Karuizawa, to propose ways to enact a vaguely worded "action plan" on marine plastic waste introduced at the 2017 summit in Germany.

Japan, while not a major marine plastic polluter, is the world's No. 2 consumer of plastic packaging per person after the United States.

Vegetables and fruit sold in supermarkets in Japan are commonly wrapped in plastic, sometimes individually. The cultural emphasis on hygiene, careful packaging and offering products in small portions adds to the problem.

Japanese bureaucrats are working on a law that would require retailers to charge customers for plastic bags - something many supermarkets already do.

Japan also plans to make the medal podiums at the 2020 Tokyo Olympics out of recycled plastic in an attempt to stir consumer awareness about the issue.

Activists say that although efforts to recycle and ban single-use items are needed, reducing plastic production is also crucial.

"There's a misconception that we can recycle our way out of this," said Neil Tangri, global plastics policy adviser at the Global Alliance for Incinerator Alternatives in Berkeley, California.

"My fear is that (G20 leaders) will say that plastic production isn't the problem, it's waste management," he added. "We're saying plastic is a problem you need to tackle at the source."

The world produced about 380 million metric tons of plastic in 2015, according to research published in Science Advances journal. The World Bank says humans generated 242 million tons of plastic waste in 2016.

About 55% of plastic waste was discarded in 2015, 25% incinerated and 20% recycled. But since plastic was introduced into the consumer market in the 1950s, only 9% of the cumulative total has been recycled, the Science Advances study shows.

Tackling plastic pollution became more of a global priority after China, which had been accepting a hefty chunk of the world's waste, banned imports at the start of 2018.

Boatloads of plastic debris have been diverted to Malaysia and other Southeast Asian nations, overwhelming them. Last month, Malaysia said it would ship 3,000 tons of garbage back to the countries it came from.

Asia is also home to the biggest contributors to the estimated 8 million metric tons of plastic trash that winds up in the ocean each year, according to research published in the journal Science.

The top five marine plastic trash offenders are all in Asia: China and Indonesia - both G-20 members - followed by the Philippines, Vietnam and Sri Lanka, that study shows.

Such litter inflicts $1.3 billion in damage annually to fishing, shipping and tourism industries in the Asia-Pacific.

Most commonly used plastic does not biodegrade. Over time in the ocean and exposed to sunlight, it breaks down into tiny pieces called microplastics that are ingested by sea creatures, raising concerns about chemicals tainting human sources of food.

Plastic was even found last month at the bottom of the Marianas Trench, off the Philippines, the deepest place on Earth.

The plastic output seems poised to increase, particularly in Asia.

They see opportunities in producing household chemicals and materials for electronic goods, piping, packaging and textiles.

Packaging, which includes everything from plastic bags to bubble wrap, accounts for 44% of plastic production, according to industry estimates.

Tightening government policies could crimp that demand - something oil companies say they are monitoring closely.

"If the world keeps introducing bans on plastic bags and straws, our sales would decrease," said an official at a South Korean petrochemical maker, who declined to be identified because he was not authorised to speak to the media.

"But plastic is still widely used in the industrial sector ... and demand from developing countries is growing," he said. "In the long term, we are looking to develop environment-friendly materials and plastics."

Japan's petrochemical industry wants to cooperate in tackling environmental issues, Takashi Tsukioka, the head of the Petroleum Association of Japan, told a news conference last month. Still, he warned that replacing plastic straws with wooden ones could lead to deforestation.

"We should, in the first place, focus on separating and recycling, which Japan has been doing, and then seek broad solutions, instead of jumping quickly to one approach," he said. "In the end, we should promote innovation."