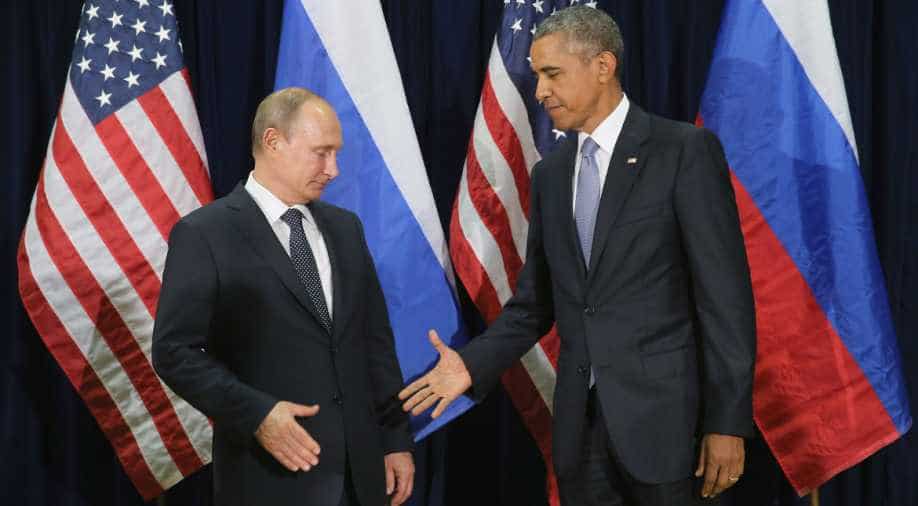 Russian President Vladimir Putin and US President Barack Obama shake hands for the cameras before the start of a bilateral meeting at the United Nations headquarters September 28, 2015 in New York City. Photograph:( Getty )

Electoral College electors will not receive any intelligence briefing concerning Russian interference in the 2016 US election, says the Office of the Director of National Intelligence (DNI) on Friday, CNN reports.

The intelligence community said it will not discuss the Russian hacks until a review ordered by Obama is completed in January, NBC reports.

US intelligence agencies said as far back as October 7 they were "confident" Russia was involved in efforts to hack information related to the election, and Obama himself suggested Friday, in his last press conference of the year, that Putin was responsible for meddling in the US election. "Not much happens in Russia without Vladimir Putin...this happened at the highest levels of the Russian government," he said.

In the US election, citizens actually vote for the Electoral College voters, who then usually select the presidential candidate their state favoured. But with Trump winning the election despite losing the popular vote by millions, this year presents controversy.

Earlier this month, a group of electors for Clinton called for a briefing ahead of the vote in an open letter to Director of National Intelligence, James Clapper, CNN reports.

On Monday, CNN reported that Clinton's campaign manager, John Podesta, backed the electors seeking to be briefed on the question of foreign interventions, the closst Podesta and anyone from the Clinton camp came to calling into question the legitimacy of Trump's presidency.

Podesta said in a statement: "We believe that the administration owes it to the American people to explain what it knows regarding the extent and manner of Russia's interference and this be done as soon as possible.

Will the Electoral College not vote Trump?

While a total of 29 US states have laws that require the electors to cast their votes for whichever candidate won that state's popular vote, the penalties for not doing so are weak.

Christopher Suprun, a paramedic from Texas, said he will vote against Trump despite the result of his state's election. "Donald Trump lacks the foreign policy experience and demeanor needed to be a commander in chief," he wrote in a New York Times op-ed, NBC reports.

Also from Texas is elector Art Sisneros, who resigned in November, saying a vote for Trump "would bring dishonour to God,'" NBC quotes him as saying,

However, Republicans say that party lawyers have contacted 306 Republican electors, and they believe only a few may vote for someone other than Trump, NBC reports. An Associated Press survey, which interviewed 330 of the 538 electors, found "widespread Democratic aggravation with the electoral process but little expectation that the hustle of anti-Trump maneuvering can derail him".