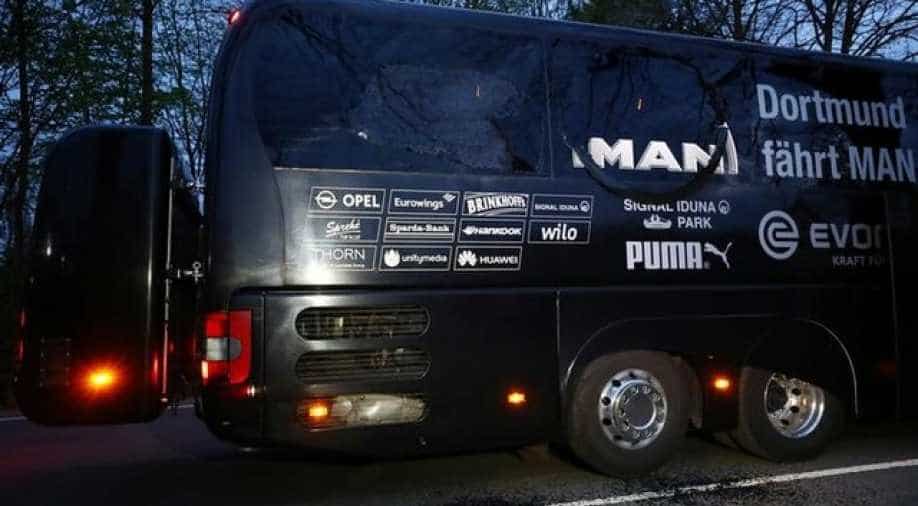 The Borussia Dortmund team bus is seen after an explosion near their hotel before the game. Photograph:( Reuters )

The explosives used in the attack on the bus of football team Borussia Dortmund may have come from supplies belonging to the German armed forces, a newspaper cited a source involved in the investigation as saying on Saturday.

It is still unclear who carried out Tuesday's attack. German prosecutors have doubts about the authenticity of letters that suggested Islamist militants were behind it and Bild newspaper cited an investigator as saying right-wing extremists were probably responsible.

"The explosives in the pipe bombs, which were filled with metal pins, might have come from the stocks of the German armed forces but that's still being checked," newspaper Welt am Sonntag cited a source involved in the investigation as saying.

The source also said that specialist knowledge was required to use the military detonators, which are not easy to get.

A spokeswoman for the federal public prosecutor's office declined to comment on the report.

The players' bus was heading to their stadium for a Champions League match against AS Monaco on Tuesday when three explosions occurred, injuring Spanish defender Marc Bartra and delaying the match by a day. Dortmund said on Twitter on Saturday Bartra had been released from hospital.

It said regional police wanted to have a greater presence if necessary and use dogs trained to sniff out explosives.

Joachim Herrmann, interior minister of the state of Bavaria, told the same newspaper Bavaria planned to use more video surveillance, especially in crime hotspots and in public places - a controversial issue in Germany, where memories of the Nazi Gestapo and the Stasi security police still linger.

Joachim Thomas, chairman of the association of German stadium operators, told Welt am Sonntag he believed full-body scanners would be used at entrances to stadiums in future.

Arnold Plickert, GdP police union's deputy chairman, said police were overstretched already and did not have enough staff to keep watch over a team's hotel night after night so clubs would have to provide extra security staff if they wanted that.

Dortmund are due host Eintracht Frankfurt in the Bundesliga for a game at 1330 GMT on Saturday.

Bild cited Axel Hellmann, a member of Eintracht's executive board, as saying it had boosted security for the match. Dortmund police posted a picture on Twitter showing an armed officer outside the stadium, saying they had provided more security inside and out.

Bild said experts from the federal interior ministry and the interior ministries of Germany's states had discussed security for major events during a telephone conference on Wednesday and had decided checks at entrances to events should be boosted.

There was no immediate comment from the federal ministry.