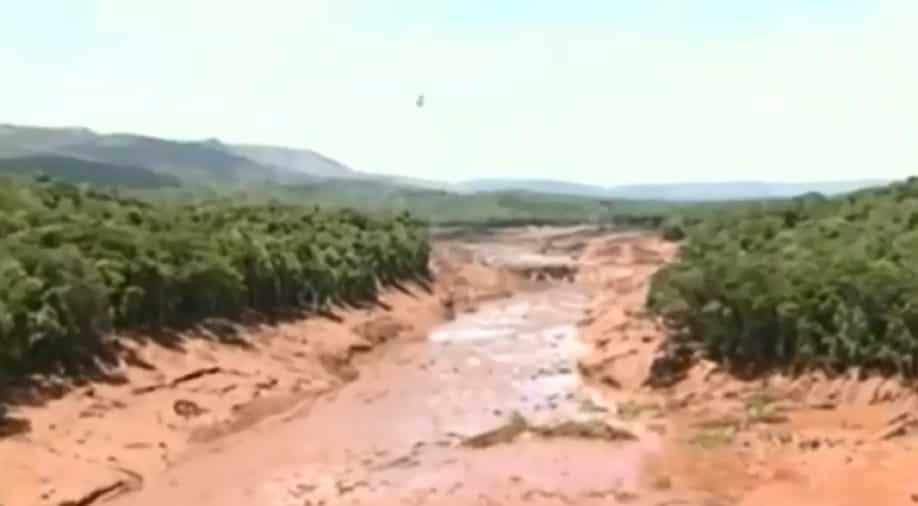 Aerial view of an area covered in mud from the ruptured dam in Brazil Photograph:( Reuters )

The dam belonged to Brazil's biggest mining company Vale, which confirmed its collapse

A dam in southeast Brazil collapsed on Friday, unleashing a torrent of mud that killed "several" people living in an area close to the city of Belo Horizonte, an official with the local fire service told AFP.

Emergency services were still responding to the situation in and around the town of Brumadinho and did not yet have a precise toll, the official said.

"According to accounts that we are receiving, there were several deaths," he said.

Television images taken from the air showed a wide swath of devastation cut through vegetation and farmland in which several homes were seen, many damaged and some destroyed, with nothing but their tiled roofs left sitting on mud.

A rescue helicopter was seen hovering close to two survivors trapped up to their waist in mud, with its crew trying to pull them to safety.

An online video showed the moment the river of tons of mud cut across a road.

The dam belonged to Brazil's biggest mining company Vale, which confirmed its collapse and said "the total priority is to protect the lives of employees and inhabitants."

Brumadinho's municipality issued an alert on social media warning residents to move away from the Paraopeba river that the dam had been holding back.

The emergency recalled trauma from a 2015 dam break in a different part of the same state of Minas Gerais, at Mariana, in which 19 people died. That was considered the country's worst environmental disaster.