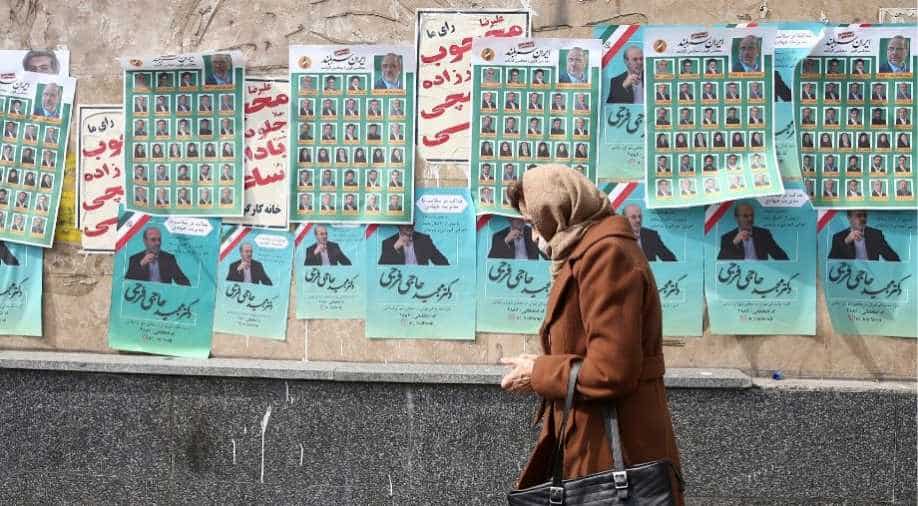 As he cast the first ballot in the election, supreme leader Ayatollah Ali Khamenei urged all Iranians to take part, saying that doing so would 'guarantee the country's national interests'.

Iran went to the polls Friday for a general election that conservatives are expected to dominate amid voter apathy after an economic slump, multiple crises and the disqualification of thousands of candidates.

The 11th parliamentary election since the 1979 Islamic Revolution comes after steeply escalating tensions between Iran and the United States and the accidental downing of a Ukrainian airliner by Iranian air defences that sparked anti-government protests.

As he cast the first ballot in the election, supreme leader Ayatollah Ali Khamenei urged all Iranians to take part, saying that doing so would "guarantee the country's national interests".

Voters formed long queues at polling stations in south Tehran, where conservatives have a solid support base, but far fewer were seen waiting to vote in upmarket northern neighbourhoods.

One official accused Iran's enemies of overplaying an outbreak of the new coronavirus -- which authorities say has killed four people in the Islamic republic this week -- in a bid to harm the credibility of the election.

In a bid to allay fears over the spread of the coronavirus, the use of ink-staining to stop people voting multiple times was made optional.

Experts predict a low turnout that they say will serve the conservatives at the expense of President Hassan Rouhani, who was re-elected in 2017 promising more freedoms and the benefits of engagement with the West.

Iran has been in deep recession since US President Donald Trump reimposed sanctions after unilaterally pulling out of a landmark nuclear deal in 2018.

"Our elections are useless," said Amir Mohtasham, who is 38 and jobless.

"Even the current parliament has 90 sitting MPs who are under investigation for financial corruption."

After seven hours of voting, more than 11 million of the 58 million people eligible to vote had done so, the interior ministry said.

Around half of the 16,033 hopefuls are contesting the 290 seats up for grabs across 31 provinces after the Guardian Council barred thousands of would-be candidates, mostly moderates and reformists.

Outgoing lawmaker Elyas Hazrati said he voted despite being disqualified.

"The Guardian Council said I don't accept Islam," he said.

On Thursday, the US slapped sanctions on five officials from the Council, including Ahmad Jannati, a powerful cleric.

Jannati laughed off the sanctions.

"I wonder, what are we going to do about all that money we have in American accounts?" the 92-year-old was quoted as saying by Tasnim news agency after voting.

"Now we can't even go there for Christmas anymore!"

The Guardian Council said it expected at least 50 per cent of registered voters to turn out, down from an average of 60.5 per cent at the past 10 elections.

Many voters have voiced disillusionment.

"After we elected Rouhani everything collapsed. He signed a very bad (nuclear) deal and looked to the West without any real guarantees," he told AFP.

"Rouhani is very weak. He just looks to the West. If he considered his people's interests this would not have happened."

As he voted, the beleaguered president sought to put a positive spin on the election.

"We are very happy that another glorious day is being added to the history of our country and revolution," Rouhani said.

In November, demonstrations over petrol price hikes spread across Iran and turned violent before being crushed in a deadly crackdown.

Tehran and Washington have nearly gone to war twice in the past seven months, most recently after the US assassinated prominent Iranian general Qasem Soleimani on January 3.

Millions of people turned out to mourn his "martyrdom", but that unity suffered a blow after Iran admitted it had on January 8 accidentally shot down a Ukrainian airliner, killing 176 people.

The authorities denied for days that Iran was to blame, before owning up to a jittery reaction by a missile operator.

The disaster unfolded as Iran's defences were on high alert for US retaliation hours after it carried out missile strikes on American troops in Iraq in response to Soleimani's killing.

Voting for the parliament, or Majles, lasts 10 hours but can be extended. Final results are not expected before Sunday.

Apart from the parliament, voters will also choose replacements for deceased members of the Assembly of Experts, an 88-strong clerical body that appoints and monitors the supreme leader.