Churchill wartime painting gift to Roosevelt up for auction 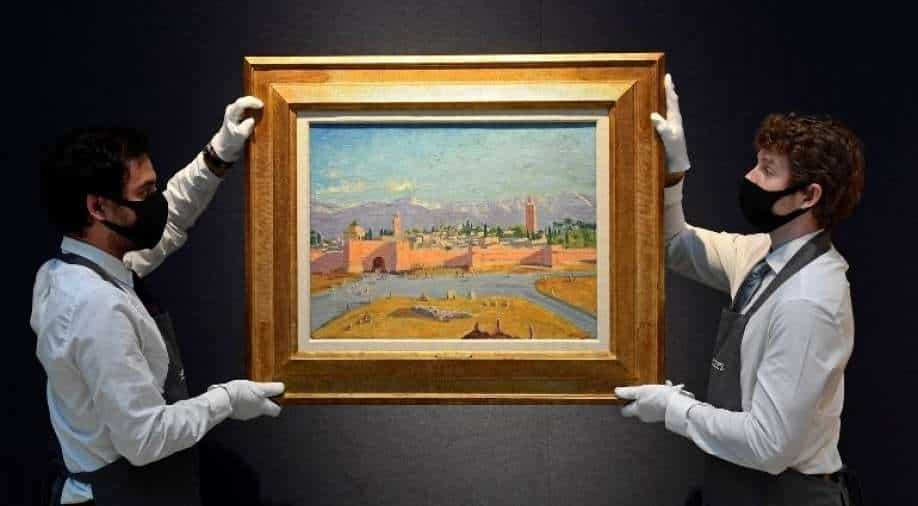 Art handlers pose with 'Tower of the Katoubia Mosque' painted by former British Prime Minister Winston Churchill in 1943, as preparations take place at Christie's ahead of a livestream auction of Modern British Art on March 1, in London on Wednesday. Photograph:( Reuters )

Churchill painted 'Tower of the Koutoubia Mosque' in Marrakech, following the January 1943 Casablanca Conference, which both leaders attended. Churchill then took Roosevelt to Marrakech to see the sun set over the Atlas mountains

A 1943 landscape painted by Winston Churchill and which the wartime British prime minister gifted to US President Franklin D Roosevelt is expected to fetch up to $3.5 million when it is sold at auction next month.

Churchill painted 'Tower of the Koutoubia Mosque' in Marrakech, following the January 1943 Casablanca Conference, which both leaders attended. Churchill then took Roosevelt to Marrakech to see the sun set over the Atlas mountains.

The work is to be sold from Hollywood actor Angelina Jolie's Jolie Family Collection, with an estimated price tag of 1.5 million pounds - 2.5 million pounds ($2.08 million - $3.47 million).

"Churchill painted nothing in the Second World War except this one painting," Nicholas Orchard, head of the Modern British Art department at Christie's said.

"Churchill painted it for Roosevelt ... And so it signifies not just their friendship but also the special relationship between Britain and America. The other factor is that Churchill considered his North African views to be a cut above all his other paintings."

Churchill, who took up painting in his forties, first visited Morocco in 1935 and painted around 45 pictures of the country, according to Christie's.

"The record for a (Churchill) painting at auction is 1.8 million pounds, and likely interested buyers will probably come from the U.K. and the United States," Orchard said.

"But there's a much greater global interest, particularly in Churchill. And so we could see Middle Eastern interest, obviously, because of the subject matter as well as interest from the Far East."

The painting is leading Christie’s Modern British Art Evening Sale on March 1, where other works on offer include a portrait of socialite Doris Delevingne by John Lavery.