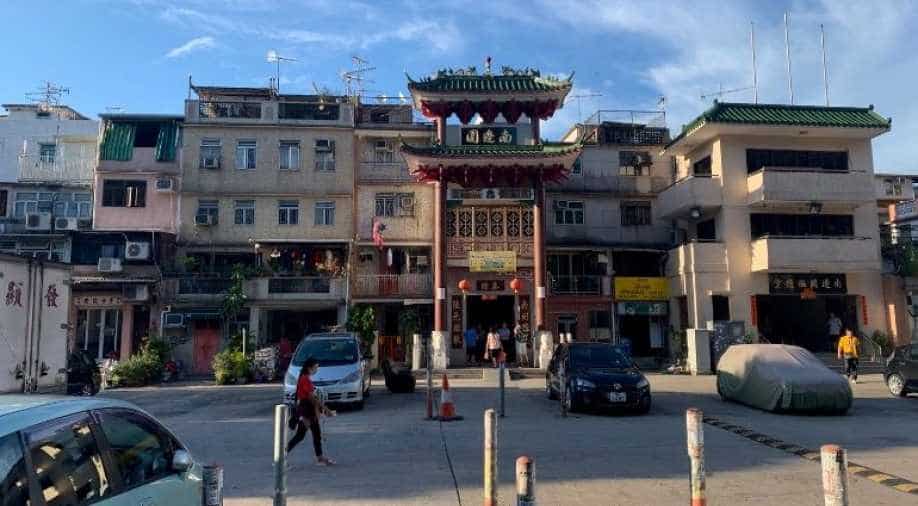 A front view of the village of Nam Pin Wai, where groups of suspected attackers at the Yuen Long train station were surrounded by police. Photograph:( Reuters )

Li Jiyi, the director of the Central Government Liaison's local district office made the appeal at a community banquet for hundreds of villagers in Hong Kong's rural New Territories.

Li Jiyi, the director of the Central Government Liaison's local district office made the appeal at a community banquet for hundreds of villagers in Hong Kong's rural New Territories.

In a previously unreported recording from the July 11 event obtained by Reuters, Li addresses the large crowd about the escalating protests that have plunged Hong Kong into its worst political crisis since it returned to Chinese from British rule in 1997.

Li chastises the protesters, appealing to the assembled residents to protect their towns in Yuen Long district and to chase anti-government activists away.

"We won't allow them to come to Yuen Long to cause trouble," he said, to a burst of applause.

"Even though there are a group of protesters trained to throw bricks and iron bars, we still have a group of Yuen Long residents with the persistence and courage to maintain social peace and protect our home."

Repeatedly, Li spoke of the need for harmony and unity between the traditional villages and the government, "especially when there is wind and rain in Hong Kong".

The banquet was attended by a Hong Kong government district officer, Enoch Yuen, and many of the city's rural leaders. Yuen gave no immediate response to Reuters' questions on Li's speech and its impact on village representatives.

When some protesters retaliated, the beatings escalated as men and women were hit repeatedly on their heads and bodies by the masked men, who wore white shirts.

Video footage showed victims fleeing the mayhem amid screams, and floors of the train station streaked with blood. Forty-five people were injured, one critically.

China's Liaison Office did not immediately respond to Reuters questions about Li's speech, and Li could not be reached for comment.

Johnny Mak, a veteran Democratic Alliance district councillor in Yuen Long who witnessed the train station bloodshed, said he believed Li's remarks had been an explicit call to arms against protesters.

"If he didn't say this, the violence wouldn't have happened, and the triads wouldn't have beaten people," he told Reuters in his office close to the station.

Ching Chan-ming, the head of the Shap Pat Heung rural committee which hosted the banquet that night, said he thought Li's speech was positive and held no malicious intent.

"How could he (Li) make such an appeal like that?," Ching told Reuters. "I don't think it was a mobilisation call. His main message is that he hopes Hong Kong can remain stable and prosperous."

The protesters are demanding Hong Kong's leader scrap a controversial extradition law that many fear will extend China's reach into the city.

The government's refusal to do so - it has agreed only to suspend the bill so far - have led to two months of sometimes violent demonstrations across the city.

Beyond the extradition bill, many activists are demanding independent inquiries into the use of police force against them, and far-reaching democratic reforms - anathema to Beijing's leaders.

China's Foreign Ministry Office in Hong Kong said earlier this week that "the recent extreme and violent acts in Hong Kong have seriously undermined the foundation of the rule of law ... and trampled on the red line of "One Country, Two Systems" which underpins Beijing's control of Hong Kong.

Two senior police sources told Reuters some of the men who attacked the protesters had triad backgrounds including from the powerful Wo Shing Wo, Hong Kong's oldest triad society, and the 14K, another large, well-known triad.

Police spokespeople didn't respond to Reuters questions about triad involvement or any aspect of their operation that night.

While Hong Kong's triads - ancient secret societies that morphed into mafia-style underworld operations - no longer hold the high profile of previous decades they remain entrenched in some grittier districts and in rural areas, according to police.

Police told reporters in 2014 during the so-called "Occupy" democracy protests, that hundreds of triad members were suspected of mounting operations to infiltrate, beat and harass those in the movement. Several dozen people were arrested at the time.

No police in sight

Within hours of Sunday's violence, police bosses battled criticism they had failed to protect the public given delays getting to the scene.

Police commissioner Stephen Lo said there had been a need to "redeploy manpower from other districts".

Democratic Party district councillor Zachary Wong said Li's message was having an impact in the days leading up to Sunday's violence and he had received repeated calls from associates a day earlier saying something was brewing.

Wong said he called local police on Saturday, and then again on Sunday at 7pm when he heard of men gathering in a Yuen Long park.

"Some people called me and said, 'We're really scared, please do something," Wong told Reuters.

Both Mak and Wong said they were told by police they were aware of the situation and were handling it.

During this time, pro-Beijing lawmaker Junius Ho was filmed laughing and shaking hands with some of the men in white shirts near the park. Giving them the 'thumbs up' sign, he said: "You are my heroes". The men laughed and cheered in response.

Ho later told reporters he had no knowledge of or involvement in the violence, but was merely reaching out to his constituents.

Ho was not immediately available at his office and could not be reached on his mobile phone.

Several hours later, when the most violent assaults took place at the train station, there were still no police present to prevent the bloodshed.

"It doesn't make sense that for many hours, there wasn't a single police car in sight," said Mak.

After the attacks in Yuen Long train station, some of the assailants fled to the traditional walled village of Nam Pin Wai nearby.

There, riot police and other officers surrounded and questioned scores of men in white shirts for several hours, live media coverage showed.

Sometime after 4 a.m., the men in white began to leave. No arrests were made at the time, although a dozen men have since been arrested over the incident, according to a police statement.

A police commander told reporters at the scene that no arrests were made as the police couldn't prove the men were the assailants, and no weapons were found.

Public anger over the incident has built in the days since, and tens of thousands of people are expected to march through Yuen Long on Saturday.

A rare open letter signed by a group of civil servants criticised authorities' handling of the violence.

"The police's lack of response on July 21 had made people suspect the government colluded with triads," wrote a group of 235 civil servants from 44 government departments including the police force.

"This had not only caused citizens to lose confidence in the police, but also made civil servants suspect that the government departments are not aimed to serve citizens faithfully."

At a press conference, Police Commissioner Lo denied any collusion between his force and triads but acknowledged the need to restore public confidence.