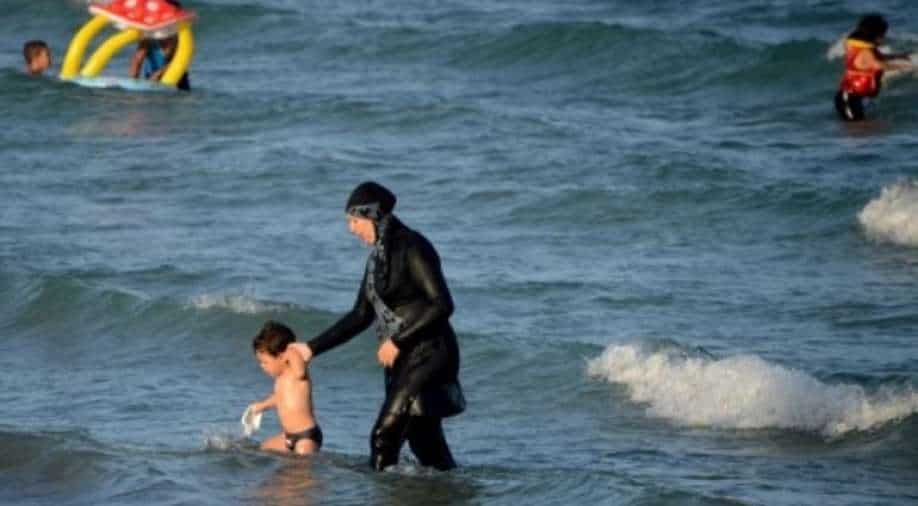 It is prohibited in most state-run pools for hygiene, not religious reasons where strict swimwear rules apply to all, including men who are required to wear tight-fitting trunks.  Photograph:( AFP )

Grenoble's mayor, Eric Piolle, one of the country's highest profile Green politicians who leads a broad left-wing coalition at the city council, has championed the move but run into a fierce campaign of opposition

The French city of Grenoble on Monday authorised the wearing of the so-called "burkini" by Muslim women in state-run swimming pools, reigniting one of France's most contentious debates on religous dress.

The all-in-one swimsuit, used by some Muslim women to cover their bodies and hair while bathing, has become a controversial talking point during the holiday season in recent years.

Seen as a symbol of creeping Islamism by its critics and an affront to France's secular traditions, many right-wingers and some feminists would like to ban it outright.

It is prohibited in most state-run pools for hygiene, not religious reasons where strict swimwear rules apply to all, including men who are required to wear tight-fitting trunks.

The move applies across the board, meaning men will able to wear long shorts and women can also bathe topless in the Alpine city's pools.

Grenoble's mayor, Eric Piolle, one of the country's highest profile Green politicians who leads a broad left-wing coalition at the city council, has championed the move but run into a fierce campaign of opposition.

He managed to rally enough votes at a city council meeting to approve the measure, despite not having the support of his own EELV party which distanced itself from the measure.

It was carried by the slimmest of margins with 29 votes for, 27 against and 2 abstentions after two-and-a-half hours of tense debates.

"All we want is for women and men to be able to dress how they want," Piolle told broadcaster RMC Monday.

Opponents see it differently, including the influential conservative head of the wider Auvergne-Rhone-Alpes region, Laurent Wauquiez, who has promised to withdraw funding from the city.

"I am convinced that what Mr Piolle is defending is a dreadful dead-end for our country," Wauquiez said at the beginning of May, accusing him of "doing deals with political Islam" to "buy votes".

At the council meeting the former right-wing mayor Alain Carignon urged a local referendum on the issue.

"You can't force through such a sensitive subject. You have no legitimacy, you weren't elected for that," he said.

Watch | Gravitas: Can France and India bring peace to Ukraine?

The regional spat has put the burkini back in the headlines nationally, animating French talk shows and the political class ahead of parliamentary elections next month.

The issue of how people dress for the pool touches on highly sensitive topics in France, including fears about the influence of Islam and threats to the country's cherished secularism.

"It seems to me that [mayor Piolle] doesn't realise the harm he is doing to our Republican values," Prisca Thevenot, a spokeswoman for President Emmanuel Macron's party, told Radio J on Monday.

"This would be breaking with the rules to respond to political desires based on religion," she added.

Attempts by several local mayors in the south of France to ban the burkini on Mediterranean beaches in the summer of 2016 kicked off the first firestorm around the bathing suit.

The rules, introduced after a string of terror attacks in France, were eventually struck down as discriminatory.

Three years later, a group of women in Grenoble caused a splash by forcing their way into a pool with burkinis, leading the prime minister at the time to insist that the rules should be followed.

French sports brand Decathlon also found itself at the centre of a similar row in 2019 when it announced plans to sell a "sports hijab" enabling Muslim women to cover their hair while running.

Grenoble is not be the first to change its rules, however.

The northwestern city of Rennes quietly updated its pool code in 2019 to allow burkinis and other types of swimwear.

The debate about the burkini comes as French Muslim women footballers are battling to overturn a ban on the wearing of religious symbols during competitive matches.

The French Football Federation currently prevents players from playing while wearing "ostentatious" religious symbols such as the Muslim hijab or the Jewish kippa.

A women's collective known as "les Hijabeuses" launched a legal challenge to the rules in November last year.