As China locks up Muslims in Xinjiang, it opens its doors to tourists 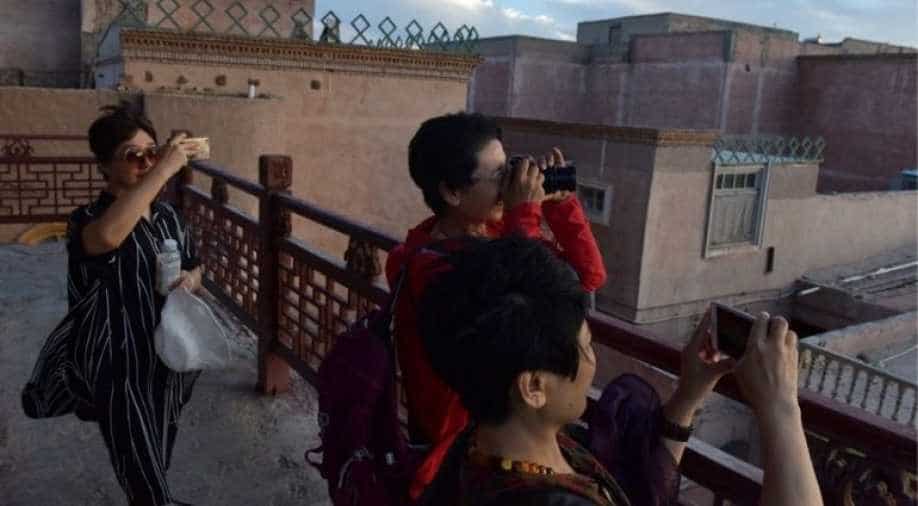 Xinjiang is one of the fastest-growing areas for tourism in China.

From the expansive dunes of the Taklamakan Desert to the snow-capped peaks of Tianshan, Chinese authorities are selling troubled Xinjiang as a tourist idyll, welcoming travellers even as they send locals to internment camps.

The government has rounded up an estimated one million Uighurs and other mostly Muslim Turkic-speaking minorities into re-education camps in the tightly-controlled region in China's northwest, but it has also created a parallel universe for visitors, who are only shown a carefully curated version of traditional customs and culture.

"It didn't look to me like -- unless you were picked up and put in a camp -- that these Uighur communities seemed to be living in some kind of fear," said William Lee, who has taught at universities in China for 10 years and visited the region in June.

"That's just my impression," he added.

Xinjiang, a fraught region where flare-ups of interethnic violence have led to unprecedented levels of surveillance, is one of the fastest-growing areas for tourism in China.

Armed police and frequent checkpoints have not dampened the flow of vacationers visiting the region, which in 2018 saw a 40 per cent increase year-on-year of visits -- mainly from domestic tourists -- outstripping the national average by 25 per cent, according to official figures.

The business has grown steadily over the years mainly because "Xinjiang is very stable", explained Wu Yali, who runs a travel agency in the region.

Though tourists are not used to the high level of security at first, "they adapt after a few days," she told AFP.

But travellers are barred from witnessing the most controversial part of Xinjiang's security apparatus: the network of internment camps spread across the vast region.

Many of these facilities are outside main tourist hubs and are fenced off with razor-wired walls.

On a six-day trip to the region last month, AFP reporters encountered roadblocks and were turned away by security forces upon nearing some camps.

"The violence that is being inflicted on the bodies of Uighur and other Muslim people...has been rendered invisible," said Rachel Harris, who studies Uighur culture and music at the School of Oriental and African Studies University of London.

"For a tourist who goes and travels around a designated route, it all looks nice," she told AFP. "It's all very quiet and that's because there's a regime of terror being imposed on the local people."

According to Communist Party mouthpiece People's Daily, the regional government offered travellers subsidies worth 500 yuan ($73) each in 2014, after tourism plunged following a deadly knife attack blamed on Xinjiang separatists in southwestern China.

By 2020, Xinjiang is aiming to hit a total of 300 million visits by tourists and rake in 600 billion yuan ($87 billion), according to the region's tourism bureau.

Many also offer "ethnic" experiences, often in the form of dance performances. Some tour operators even include visits to Uighur homes.

Even as Chinese authorities seek to contain the region's Muslim minorities, they are monetising ethnic culture -- albeit a simplified version of it, experts say.

"Uighur culture is being boiled down to just song and dance," said Josh Summers, an American who lived in Xinjiang for more than a decade and wrote travel guides for the region.

"What makes me sad is what ends up happening is there are only very specific parts of Uighur culture that get maintained because of the tourism," he said, citing the neglect of Uighur paper-making traditions and desert shrines.

"Ever since the management of Xinjiang became stricter, the impact on Yengisar's small knives has been very large -- now there are very few shops selling small knives," agreed Li Qingwen, who runs a tourism business in Xinjiang.

The government wants Uighurs to "show how they excel in singing and dancing, instead of living under religious rules and restrictions," he told AFP.

But while ethnic song and dance is showcased to tourists, Uighurs are often restricted in how they express their own culture.

Large, spontaneous gatherings of Uighurs -- even if they involve dancing -- are less frequent because of tightened security, said Summers.

Night markets too are more controlled. In Hotan, what used to be an outdoor night market is now inside a white tent, where red lanterns hang from the ceiling and uniform food stalls adorned with Chinese flags sell lamb skewers, but also sushi and seafood.

Over the past few years, cultural leaders in the Uighur community have disappeared, raising fears they have been detained.

In February, Turkey's foreign ministry claimed that prominent Uighur musician and poet Abdurehim Heyit had died in a Chinese prison -- prompting China to release a "proof-of-life" video of an inmate who identified himself as Heyit.

And though tourists are buffered from the ugliest parts of Xinjiang's security crackdown, it is not difficult to bump against the region's many red lines.

A traveller from Southeast Asia, who requested anonymity due to fear of reprisals, described the barriers he faced when trying to pray at a mosque.

Many places of worship were closed in Kashgar, he said, unlike mosques in other Chinese cities.

At Idkah Mosque, Kashgar's central mosque, the tourist was told he couldn't pray inside -- and that he had to buy a ticket to enter.

"They want to separate travellers from locals," he said, adding that his visit to Xinjiang confirmed what he had read about re-education camps.

He added: "There's a lot more of Xinjiang that I want to discover. But I really hope that Xinjiang will become the old Xinjiang."