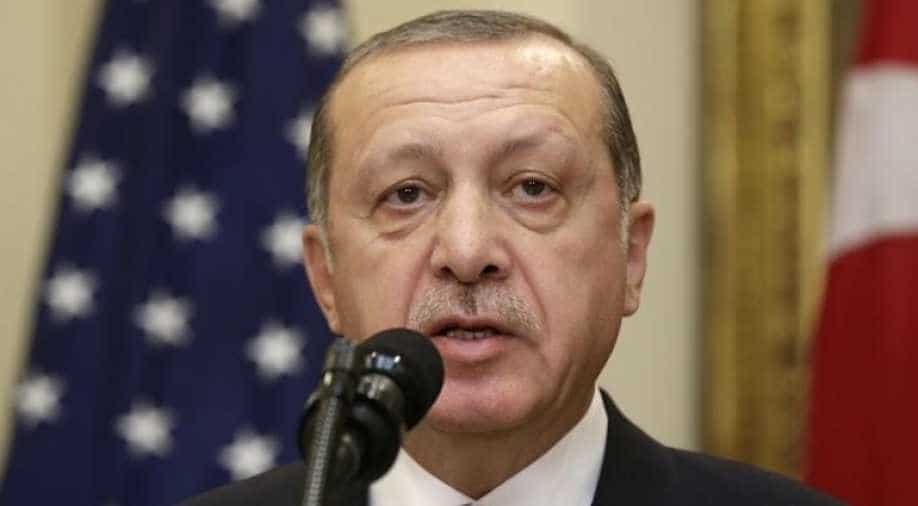 Turkey's President Recep Tayyip Erdogan delivers a statement to reporters alongside US President Donald Trump after their meeting at the White House in Washington, US May 16, 2017. Photograph:( Reuters )

Amnesty criticised the dismissals as "carried out arbitrarily on the basis of vague and generalised grounds of ''connection to terrorist organisations"||Emergency rule is due to expire on July 19. ||But Erdogan yesterday said it would continue until there was peace, without giving a time limit

Over 100,000 people from the public sector including members of the judiciary and armed forces have been dismissed since the attempted overthrow of President Recep Tayyip Erdogan in July, the rights group said.

They have all been dismissed by decree under the state of emergency put into force a few days after the failed putsch bid.

The emergency has been renewed three times and is due to expire on July 19. But Erdogan yesterday said it would continue until there was peace, without giving a time limit.

In a report entitled "No end in sight", Amnesty criticised the dismissals which it said were "carried out arbitrarily on the basis of vague and generalised grounds of 'connection to terrorist organisations'".

The organisation urged the government to put in place a "prompt and effective appeal mechanism for those already dismissed".

The dismissed public sector officials Amnesty spoke to described a lack of evidence presented to them after finding their names on a list published in the Official Gazette.

"None... Have been provided with any explanation of the reason for their dismissal beyond the generalised allegation contained in the decrees," Amnesty wrote.

The government insists that those dismissed have access to an appeals commission -- whose members were confirmed last week -- which will hear their cases.

But Amnesty said the commission was not an "effective domestic remedy", and urged the Turkish government to establish a "genuinely independent, impartial, transparent and effective appeal mechanism".

It criticised the position many found themselves in with limited -- if any -- ability to find work and their passports cancelled. "Some of the measures, including the barring of individuals from all forms of public service and the routine cancellation of passports would violate rights even in the cases where dismissal was justified," the report said.

According to Amnesty, of those dismissed more than 33,000 are teachers and other employees of the education ministry while over 24,000 are police officers and others from the interior ministry.

Over 8,000 are members of the armed forces, more than 5,000 are academics and include those working in the higher education sector as well as over 4,000 judges, prosecutors and justice ministry officials, it added.

As well as sackings, more than 47,000 have been arrested over alleged links to the movement led by US-based Muslim cleric Fethullah Gulen, accused of ordering the failed coup.

Gulen, who lives in self-imposed exile in Pennsylvania, strongly denies the charges but Turkey alleges his group is a terror group which it dubs the "Fethullah Terror Organisation" (FETO).

Although Western governments and human rights activists have hit out at the crackdown, Ankara defends the purges as necessary to clear individuals with alleged malicious intent inside the public sector.

Trouble in the USA

In one video, Erdogan is sitting in the back seat of this black Mercedes, and watches as his guards beat up the protesters. Some have claimed that the order to assault the protesters came from Erdogan himself.