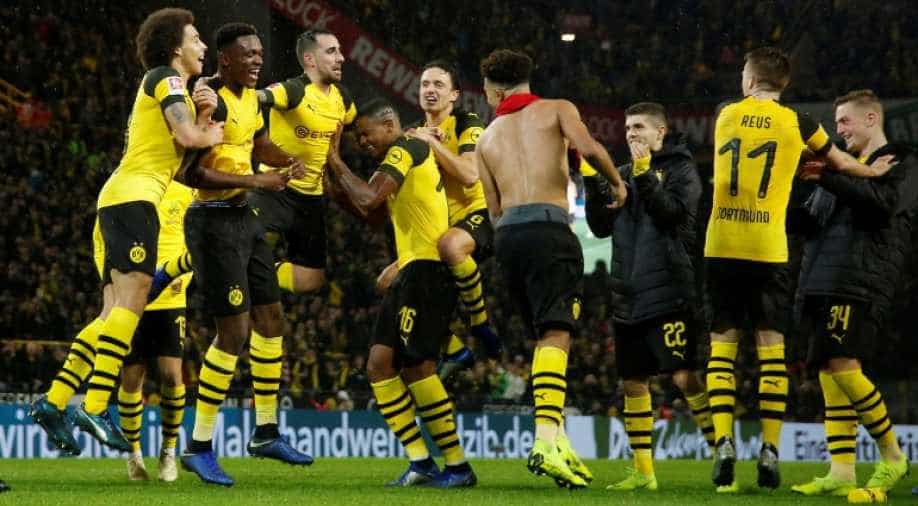 Bayern Munich's defeat in the German 'Der Klassiker' on Saturday was the first time since 2011 that they lost a game after leading at halftime.

Borussia Dortmund beat champions Bayern Munich 3-2 to tighten their grip on top spot in the Bundesliga, opening up a seven-point gap to their main title contenders, who dropped to fifth.

Here are some of the main talking points:

- Bayern Munich's defeat in the German 'Der Klassiker' on Saturday was the first time since 2011 that they lost a game after leading at halftime. They have collected just eight points from their last seven games.

- This is the first time since Borussia Dortmund`s title-winning 2011/12 season that they have opened up such a gap to the Bavarians.

- Borussia Dortmund striker Paco Alcacer has set a league record in his first season in Germany, needing only 218 minutes to score eight goals in the Bundesliga. The previous record stood at 519 minutes, set in 1963 by Charly Doerfel.

Spaniard Alcacer scored seven of the eight goals as a substitute, including the winner on Saturday.

- RB Leipzig stretched their unbeaten run to 10 league matches and moved into third place after beating Bayer Leverkusen 3-0 on Sunday. Leipzig`s last league defeat was on the first matchday of the season back in August against Dortmund.

- Eintracht Frankfurt also have a good run going. They are , unbeaten in nine matches in all competitions -- six of them in the league -- and winning eight of them.

Luka Jovic scored twice in their 3-0 victory over struggling Schalke 04 to take his tally to nine goals, more than the entire Schalke team have scored so far.

- There was more bad news for Schalke with forward Mark Uth being ruled out for some time with a leg muscle injury he picked up on Sunday. The Royal Blues, runners-up last season, are a point above the relegation zone.