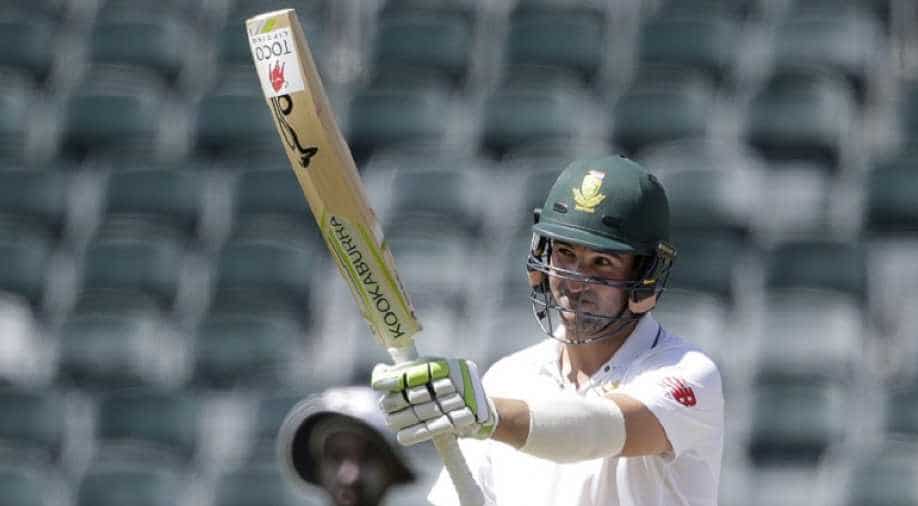 Dean Elgar raises his bat as he celebrates scoring half century Photograph:( AFP )

South Africa were 136 for three in their second innings while chasing 241 against India at tea on the fourth day of the third and final cricket Test, here today.

Dean Elgar (61 not out) and Faf du Plessis (0) were at the crease at the break with South Africa still needing 105 runs for a win with seven wickets in hand.

Earlier, the partnership between Elgar and Hashim Amla frustrated India with an unbeaten 64-run stand, taking South Africa to 69 for one at lunch on a pitch that appears to have become less threatening in the third and final Test here.

This was after play was delayed due to heavy morning rains in Johannesburg. The team arrived on schedule at the Wanderers but had to wait for better conditions for play to resume.

The umpires Aleem Dar and Ian Gould had two inspections at 10 am and 10.30 am (local time). After the second inspection, they were happy enough to allow play to resume 30 minutes later.

Finally, the game began at 11 am local time, with all three sessions rescheduled, after an hour's delay. The morning session was 90 minutes long.

Starting from their overnight score of 17/1, South Africa made steady progress. Jasprit Bumrah (0-20) completed his over from last evening, while Bhuvneshwar Kumar (0-20) and Mohammed Shami (1-15) started off proceedings properly.

On day one, India were bowled out for 187 runs in their first innings after opting to bat. Virat Kohli (54) and Cheteshwar Pujara (50) scored contrasting fifties while Kagiso Rabada finished with 3-39.

On day two, Jasprit Bumrah (5-54) picked up his maiden five-wicket haul in Test cricket as South Africa were bowled out for 194 in their first innings. Hashim Amla scored 61.

On day three, brave knocks from Virat Kohli (41) and Ajinkya Rahane (48) carried India to 247 in their second innings before play was halted early on account of dangerous pitch.

South Africa have already won the three-match series with a 2-0 lead after winning the first Test in Cape Town by 72 runs and the second Test in Centurion by 135 runs.