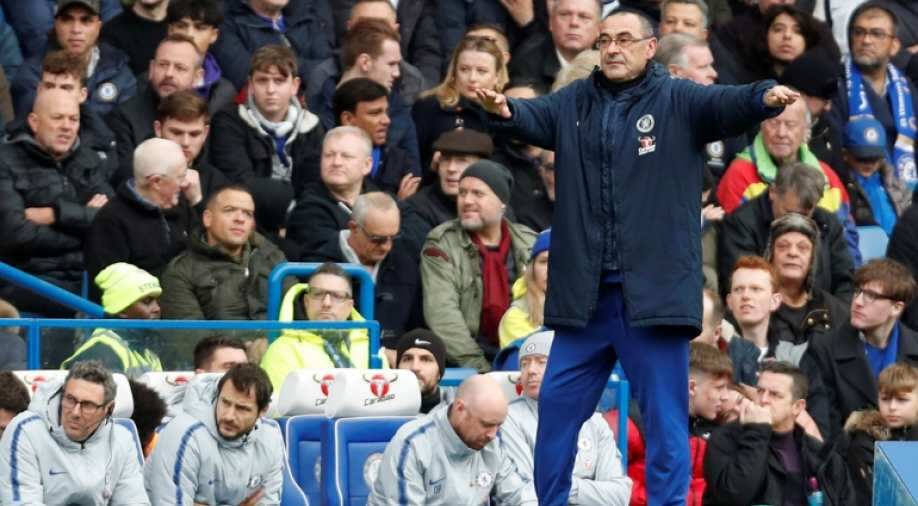 A relieved Maurizio Sarri said his players were too tense after last weekend's mauling by Tottenham Hotspur to kill off bottom-placed Fulham, until substitute Ruben Loftus-Cheek's late strike settled the Blues' 2-0 win on Sunday.

Despite going ahead in the fourth minute when Spain forward Pedro skipped inside his marker to score, Chelsea struggled to show much fluency and were indebted to goal-keeper Kepa Arrizabalaga for denying Fulham an equaliser in the second half.

"Today it was really very important the result," Sarri told reporters. "We needed, I think, to kill the match before but today I think that we were a little bit tense.

"Of course it wasn’t easy in the days after Tottenham -- for me, for the players -- but I think we have talked too much about that match...Today it was important to react."

Spurs beat Chelsea 3-1 last Saturday in a game that could have finished with a much more embarrassing scoreline for Sarri's team who had been undefeated in the league before then.

"In Tottenham, 11 players played very badly. I thought that today it was natural to give them another chance," Sarri said.

Chelsea -- who sit third in the Premier League pending the outcome of Spurs' encounter with Arsenal on Sunday -- will face stiffer tests than Fulham over the next six days.

They visit Wolverhampton Wanderers, one of the surprise success stories of the season so far, on Wednesday and host league leaders Manchester City on Saturday.

Fulham's new coach Claudio Ranieri, who oversaw a 3-2 win against Southampton last weekend in his first match in charge, said he was happy with the performance of his players against Chelsea despite their defeat.

"It’s strange to tell but it is true. I think we played much better today than the Southampton match. We have to continue this way," Ranieri, a former Chelsea manager, said.

During the game, the Italian appeared annoyed as his players wasted chances to punish Chelsea and he vented his frustration in coarse Italian on the touchline.

But he was more measured in his post-match news conference.

"My players must understand better my philosophy because I play very, very fast," Ranieri said.