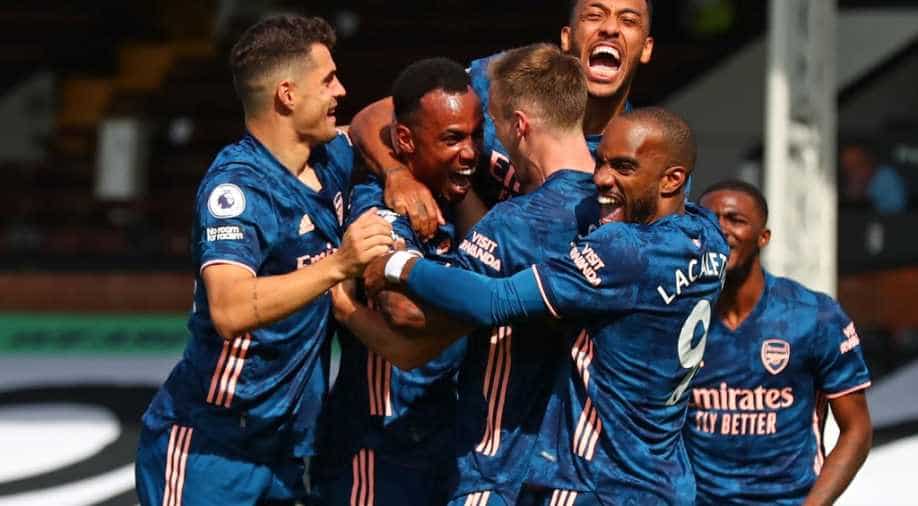 Arteta's side kicked off the new Premier League season with the kind of confident display that has become their hallmark since Arteta took charge.

Mikel Arteta expects Pierre-Emerick Aubameyang to finally commit his future to Arsenal in the next few days after the Gabon forward's superb strike capped Saturday's 3-0 win at Fulham.

Arteta's side kicked off the new Premier League season with the kind of confident display that has become their hallmark since Arteta took charge.

Arsenal's free-flowing attack was too incisive for promoted Fulham and Alexandre Lacazette gave the visitors an early lead at Craven Cottage.

Brazilian defender Gabriel Magalhaes scored Arsenal's second after the break in his first appearance since his close-season move from Lille.

Aubameyang added the final flourish with a typically eye-catching strike that emphasised why Arsenal are so desperate for the club captain to sign an extension to the contract which expires at the end of the season.

Gunners boss Arteta had good news for fans concerned Aubameyang might leave as he revealed their team's talisman is set to sign the contract offer.

"I'm really positive we are going to get it done very soon and hopefully in the next few days you will get some news," Arteta told BT Sport.

With former Chelsea winger Willian providing a pair of assists on his debut, it was the ideal way for Arsenal to start a season that appears full of promise after last season's FA Cup triumph.

Although their eighth-placed finish in the Premier League ranked as Arsenal's lowest final position since 1995, Arteta had little to do with that after taking charge in December following the dismal reign of Unai Emery.

The former Manchester City assistant coach has been a much-needed breath of fresh air for Arsenal and pushing for a place in the top four should not be beyond his revitalised team this term.

"I wanted to see my team determined to come to this difficult ground against a really good team that has been promoted. We had a lot of energy and did the things we trained on in this period," Arteta said.

"Gabriel didn't play for six months before today. Mohamed Elneny was brilliant. He has been excellent in training. All the boys tried really hard."

While the continued absence of fans due to the coronavirus and shorter than usual break has taken a little anticipation away from the new campaign, Arsenal were keener than most to get back in action after beating Chelsea in the FA Cup final.

The Gunners had underlined their rapid improvement by defeating Premier League champions Liverpool on penalties in the Community Shield last month and Fulham were no match for them.

The only dark cloud for Arteta was a pre-match spat between Dani Ceballos and Eddie Nketiah.

The pair had to be separated by Arsenal team-mates after Nketiah reacted to an aggressive challenge from Ceballos while a group of players were exchanging passes in the warm-up.

Arteta's worries were eased when Lacazette netted in the ninth minute.

Granit Xhaka's strike forced a miscued clearance from Tim Ream and Willian pounced with a close-range shot that Fulham keeper Marek Rodak could only push out to Lacazette, who slotted home from virtually on the goalline.

Willian was denied a debut goal when his low free-kick cannoned off the base of the post.

Gabriel was enjoying a composed debut and the 22-year-old showed he can be a goal threat as well when he doubled Arsenal's lead in the 49th minute.

Willian swung over the corner and Gabriel showed his desire as he rose above Michael Hector for an attempted header that hit his shoulder as it flashed into the net.

Fulham's defence was crumbling like the recently demolished Craven Cottage stand and Aubameyang finished them off in the 57th minute with a carbon copy of his Community Shield goal against Liverpool.

Just as at Wembley, Willian's superb cross-field pass picked out Aubameyang and he was allowed to advance unchecked into the area before bending a fine finish into the far corner.