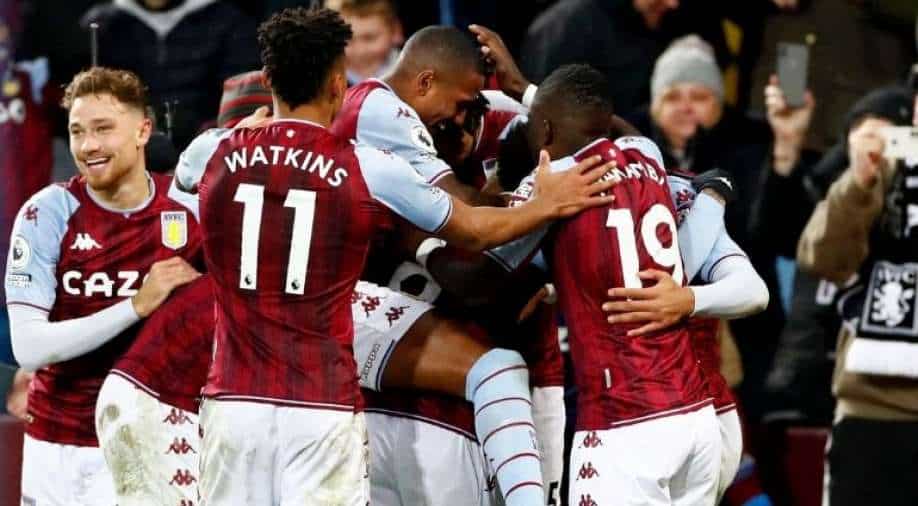 Aston Villa will face Liverpool at Anfield in their next Premier League match.

Defender Ezri Konsa scored twice as Aston Villa came back from a goal down to beat Leicester City 2-1, rising above them to 10th spot in the Premier League table on goal difference on Sunday after a pulsating encounter.

Harvey Barnes squeezed the ball through Konsa's legs to open the scoring in the 14th minute, but Konsa got the last touch on Emiliano Buendia's goal-bound header to put his side level again three minutes later.

Schmeichel, but the goal was disallowed after a VAR review when the keeper was found to have been in control of the ball.

Undeterred, Konsa got the lead nine minutes into the second half as he headed home John McGinn`s corner from a tight angle at the back post.

The goal was the 10th that Leicester have conceded from a set piece this season, excluding penalties.

McGinn's pinpoint set pieces and incisive passing created plenty of opportunities in the second half for Villa, with Ollie Watkins denied by Schmeichel in the 67th minute and Jacob Ramsey spurning another chance four minutes later.

Jamie Vardy came off the bench to give Leicester`s attack a shot in the arm but it was Harvey Barnes who came closest to getting an equaliser for the visitors, forcing a brilliant save from Emiliano Martinez in the 75th minute.

Schmeichel's goalkeeping kept Leicester in the game and he also made a late foray up the field for a corner in second-half stoppage time, but Villa managed to hang on to give new boss Steven Gerrard his third win in four league games.

Villa coach Gerrard revealed that his efforts to fire up his side at halftime paid dividends.

"I thought Leicester started really well. We were too passive. When we made passes there were loads of sloppy turnovers. We gave the players some home truths at half-time. The reaction was exactly what we wanted," he told Sky Sports.

"To take nine points from 12 is a big return from the players. They deserve a load of credit, but there`s still work to do. Some of them still need to improve," he added.

Next up for Gerrard is a return to Anfield, but it will not be a sentimental journey for the 41-year-old.

"I just want to go there and win. We go there with confidence and belief, we just want to make it as difficult as we can," he said.