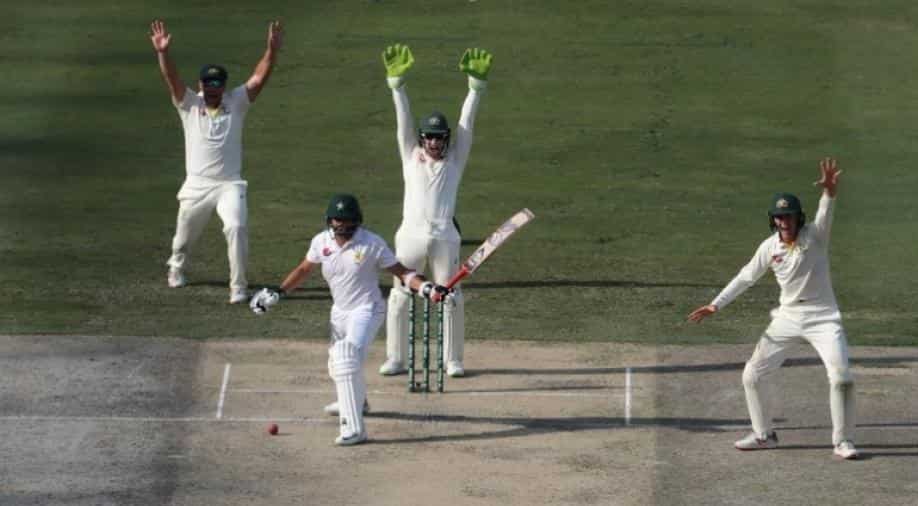 Nathan Lyon (down L) celebrates on day one of the 1st Test cricket match between Australia and Pakistan. Photograph:( AFP )

Haris Sohail and Asad Shafiq inched close to individual fifties to keep Pakistan on course for a big first innings total on day two of the series-opening test match against Australia on Monday.

Their 69-run partnership for the flourishing fifth wicket powered Pakistan to 329 for four at lunch for the loss of nightwatchman Mohammad Abbas for one.

Sohail was batting on 46 with Shafiq on 43 at the other end with Pakistan looking set for a 500-plus total on a placid track at the Dubai International Cricket Stadium.

Australia had delayed taking the new ball in their quest to generate some reverse swing and help their spinners but it did not really pay off.

Their quicks bowled tight overs in the first hour to stifle the Pakistan batsmen who had little difficulty in negotiating the spin of Nathan Lyon or Jon Holland.

Pace workhorse Peter Siddle gave Australia an early breakthrough when he bowled Abbas for one with a hint of reverse swing but it was otherwise a session of toil without success for Tim Paine`s men.

Shafiq and Sohail nicely rotated the strike and dominated the spinners, best illustrated when Shafiq stepped out to hit off-spinner Lyon straight over the sight screen for a six.