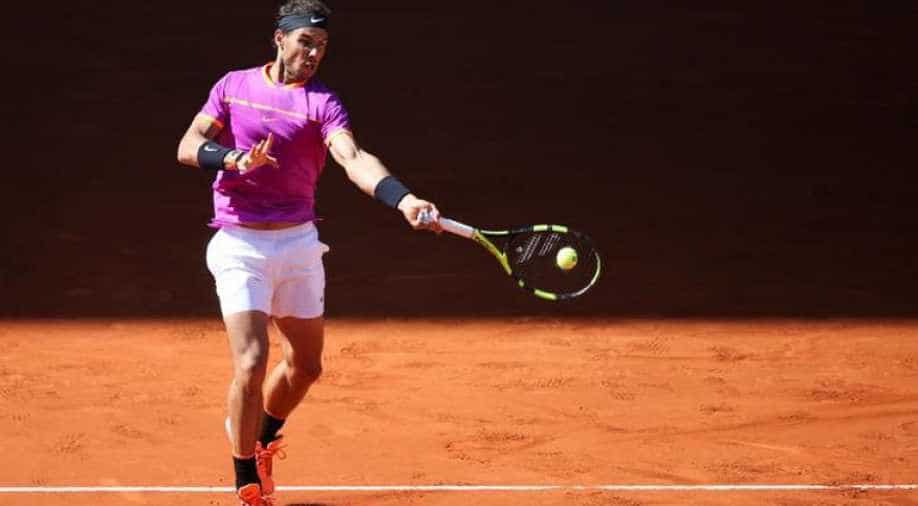 The Spaniard finished off the first set in 40 minutes and again broke the struggling Djokovic in the opening game of the second. Photograph:( Reuters )

Rafael Nadal ended a seven-match losing streak against Novak Djokovic in emphatic fashion by thrashing the world number two 6-2 6-4 on Saturday to reach the final of the Madrid Open and move within a step of a third consecutive clay-court title.

The Spaniard and four-time winner in Madrid got off to a dream start in the 50th meeting between the two great rivals, winning every point in the first game to break Djokovic, with the home crowd wildly celebrating his first point -- a potent return which the Serbian could only hit into the ground.

Defending champion Djokovic, who broke with long-time coach Marian Vajda and his staff the week before the tournament in a bid to reverse his downward trajectory of results in the last year, surrendered his serve again in the third game, and Nadal held to go 4-0 up.

Real Madrid great Raul and all-time top scorer Cristiano Ronaldo were among those watching in the stands in the Caja Majica on a scorching day in the Spanish capital in as Madrid fan Nadal continued his rampant start to the year.

The Spaniard finished off the first set in 40 minutes and again broke the struggling Djokovic in the opening game of the second. The world number two broke back in the fourth to tie the set at 2-2 and celebrated by punching the air.

It proved to be just a brief respite for the Serbian, however, as Nadal broke him again in the next game and held to restore his two-game lead.

He missed two match points on his serve and then had to save a break point before taking the contest at the third time of asking to reach the Madrid final for the eighth time.

Nadal will play either Austrian Dominic Thiem or Uruguayan Pablo Cuevas in Sunday's final, where he will look to add to his recent triumphs in the Monte Carlo Masters and the Barcelona Open.

"I knew I'd have to play very well and I thought I did very well in the first set. Then in the second I got the typical nerves from playing Djokovic," Nadal told Television Espanola.

"I couldnt be happier. To reach another final in Madrid means everything to me."

'Some responsibility was required': Irfan Pathan on Rishabh Pant's knock in WTC Final