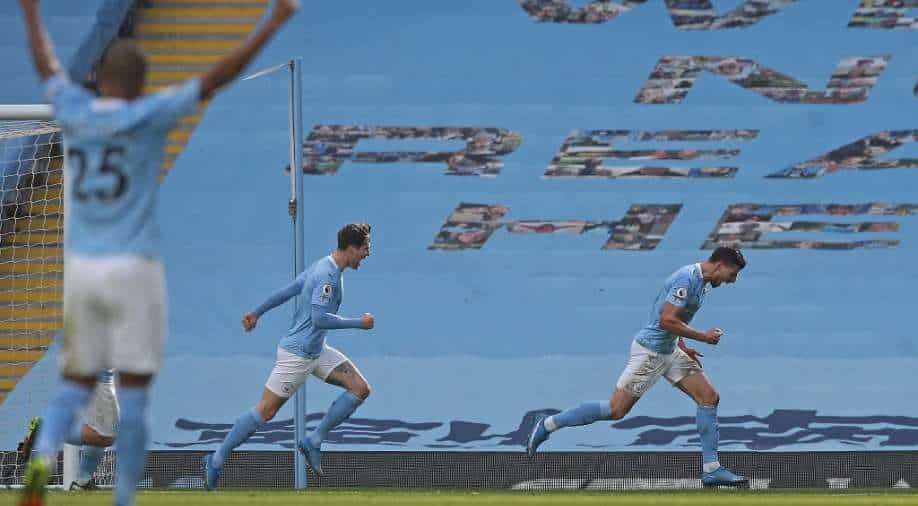 Manchester City's centre-backs Ruben Dias and John Stones both struck as the Premier League leaders beat West Ham 2-1 on Saturday, while West Brom enlivened the battle to beat the drop with a controversial 1-0 win over Brighton in which the Seagulls missed two penalties.

Manchester City's centre-backs Ruben Dias and John Stones both struck as the Premier League leaders beat West Ham 2-1 on Saturday, while West Brom enlivened the battle to beat the drop with a controversial 1-0 win over Brighton in which the Seagulls missed two penalties.

Pep Guardiola's men are now 13 points clear thanks to a 20-game winning run in all competitions that has seen them close in on an unprecedented quadruple of trophies.

For the first time in recent weeks, City showed signs of fatigue, though, and needed the dominant centre-back pairing that has been a huge part of their success defensively this season to also make their mark at the other end.

"After 10 or 15 minutes today we realised we were not going to paint anything beautiful," said Guardiola.

"When you play a lot of games - in the league and then the Champions League - this is normal. We were lucky to get all three points."

Kevin De Bruyne made just his second start since returning from a hamstring injury and the Belgian's teasing cross was powered home by Dias for his first City goal since joining from Benfica in September.

City had kept eight clean sheets in their previous 10 league games, but West Ham showed why they are fourth and pushing to edge out the likes of Liverpool, Chelsea, Tottenham and Arsenal to qualify for next season's Champions League.

"It was a terrific performance. We came here and tried to match a top side - and for long periods we did."

Michail Antonio had already threatened an equaliser by hitting the post before he did level by tapping home Jesse Lingard's mishit shot just before half-time.

But City's determination to keep winning shone through in the second-half as Stones smashed home Riyad Mahrez's pass for the winner on 68 minutes.

West Brom kept their hopes of avoiding the drop alive with just a second win in 13 games under Sam Allardyce in a match overshadowed by a surreal moment of refereeing by Lee Mason that cost Brighton an equaliser.

Kyle Bartley's early header gave West Brom the lead before Pascal Gross and Danny Welbeck both hit the woodwork either side of half-time from the penalty spot for the visitors.

Brighton did have the ball in the net when Lewis Dunk's quickly taken free-kick, after Mason had whistled for it to be taken, caught Sam Johnstone napping.

Mason initially did not award the goal before reversing his decision. However, after reviewing the incident on VAR, the goal was ruled out as the referee changed his mind for a second time.

"It's embarrassing, it's just a horrendous decision," said Dunk. "I said to the ref 'can I take it', he blew his whistle and I took it. I don't think he knew what he was doing."

In a statement, the Premier League said: "Referee Lee Mason has overturned the goal because the whistle had been blown a second time before the ball had crossed the line."

Victory for the Baggies hauls Allardyce's men to within eight points of safety, while Brighton remain just four points clear of the drop zone in 16th.

Newcastle are also now four points clear of the bottom three despite blowing the lead to draw 1-1 at home to Wolves.

Aston Villa coped without the injured Jack Grealish and kept their bid for the top four alive with a 1-0 win at Leeds.