Mainz fight back for point at Cologne on Bundesliga return 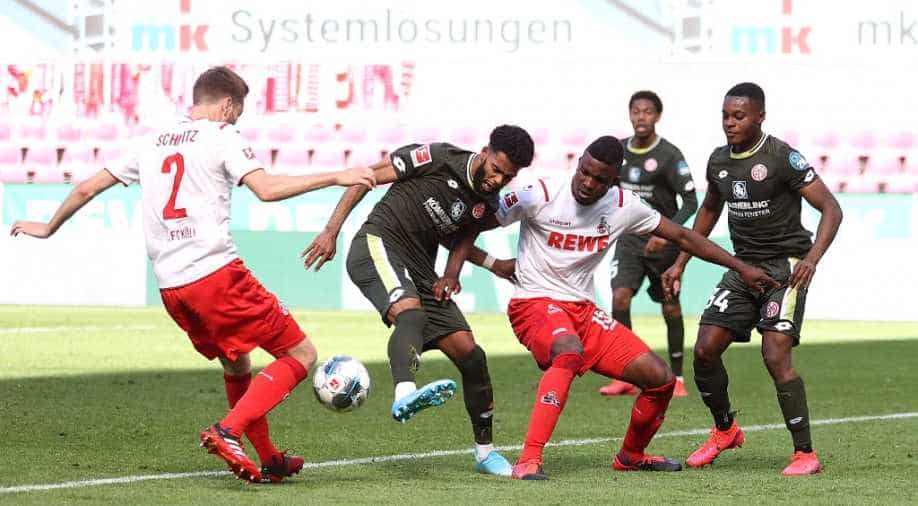 Mainz fight back for point at Cologne on Bundesliga return Photograph:( AFP )

Cologne surrendered a two-goal lead Sunday, with players' calls echoing around the stadium, as strugglers Mainz fought back to earn a 2-2 draw in the Bundesliga.

Cologne surrendered a two-goal lead Sunday, with players' calls echoing around the stadium, as strugglers Mainz fought back to earn a 2-2 draw in the Bundesliga.

On Saturday, the Bundesliga became the first top European league to return amid the coronavirus pandemic with second-placed Borussia Dortmund hammering Schalke 4-0 in the Ruhr derby.

Later Sunday, reigning champions Bayern Munich, who hold a one-point lead in their bid to win an eighth straight league title, are at mid-table Union Berlin.

In Cologne, the hosts took an early lead when Mark Uth, on loan from Schalke, converted a penalty with just six minutes gone after the striker was brought down in the area.

With hugs and handshakes banned, the players celebrated with elbow bumps instead.

Cologne added a second goal when Florian Kainz headed home a cross with just over half an hour left.

However, Mainz came roaring back with an hour played when replacement striker Taiwo Awoniyi, who had only been on for five minutes, tapped home from close range for his first Bundesliga goal.

Cameroon midfielder Pierre Kunde then earned a point for Mainz when he beat two defenders and poked the ball past Cologne goalkeeper Timo Horn to equalise on 72 minutes.

The result leaves Mainz on the verge of the relegation places but four points above the bottom three while Cologne are tenth.