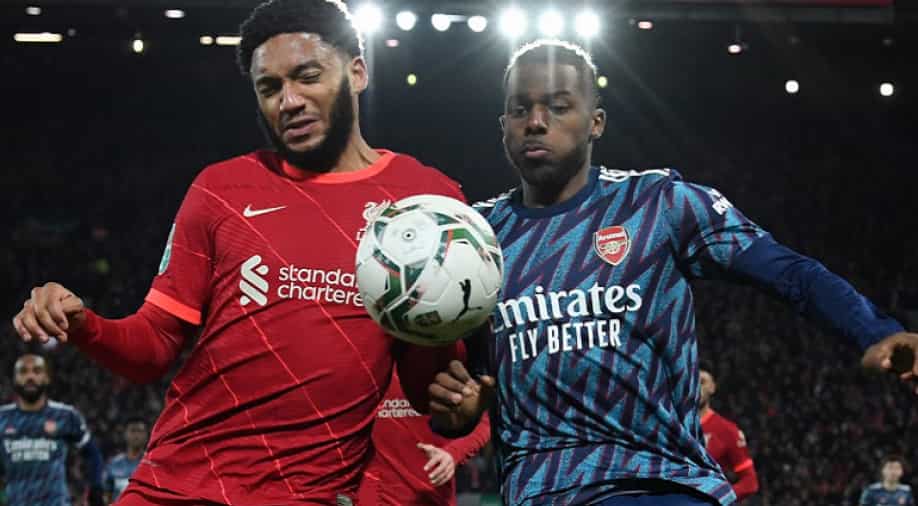 Arensal played out a golless draw against Liverpool in the League Cup semi-final. Photograph:( AFP )

Arsenal held out for a goalless draw despite being reduced to ten men in the League Cup semi-final against Liverpool.

Liverpool were frustrated by 10-man Arsenal in a 0-0 League Cup semi-final first leg on Thursday at Anfield where the visitors defended superbly after Granit Xhaka`s early sending off.

Switzerland international midfielder Xhaka was shown a red card in the 24th minute for a high challenge on Diogo Jota at the edge of the area, catching the Portuguese forward in the ribs and denying him a scoring opportunity.

Arsenal manager Mikel Arteta responded by bringing on defender Rob Holding in place of striker Eddie Nketiah, the hat-trick hero against League One side Sunderland in the quarter-finals, leaving Alexandre Lacazette as the lone man up front.

Despite Liverpool enjoying most of the possession, Arsenal kept them out with an impressive performance under pressure and still looked dangerous on the break.

The hosts were toothless without their potent strike pairing of Mohamed Salah and Sadio Mane, who are playing at the Africa Cup of Nations for Egypt and Senegal respectively.

"I would have preferred to score the goal rather than them getting the red card, especially after the game now," Liverpool manager Juergen Klopp told Sky Sports.

"It`s a two-leg game and it`s halftime and I can`t remember one time in my life when I was sitting with 0-0 at halftime wherever it was and thought, `Oh, we have no chance any more`."

The winners after next week`s second leg in London will face Chelsea, who beat Tottenham Hotspur nL1N2TS2YF 3-0 on aggregate on Wednesday, in the final at Wembley on Feb. 27.

Arsenal`s best opportunity came in the 71st minute when England international Bukayo Saka forced a crouching save from Alisson with the first real shot on target of the game.

Liverpool`s Takumi Minamino then missed a golden chance when the Japanese midfielder fired high over the bar from close range in the 90th.

The miss summed up the night for Liverpool, who lacked composure and snatched at chances against opponents dumped out of the FA Cup in the third round at Championship (second-tier)side Nottingham Forest on Sunday.

"There is so much fight in this team and it showed today," said Arsenal defender Ben White, who was man of the match.

"We dug deep and got the result that we needed ... it`s hard enough to come here with 11 men and to get one sent off straight away is not good. But absolutely superb from everyone.

"You have to concentrate the whole game and (have) a bit of luck. The result is well deserved. It`s nice to defend like that as a defender."

Arteta hailed his players for their fighting spirit.

"We played the game that we had to play, which is not our game," said the Spaniard, whose side picked up a few injuries with right back Cedric Soares taken off after only 12 minutes and replacement Calum Chambers struggling at the end.