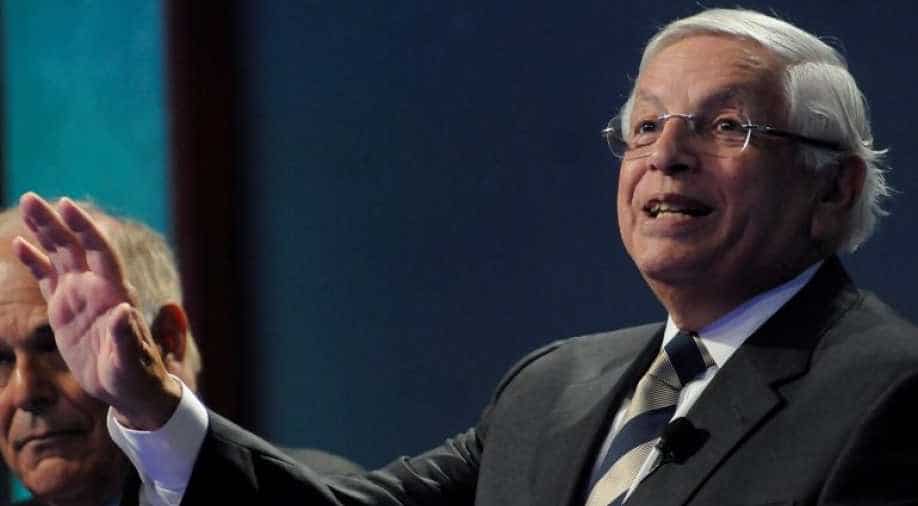 Former National Basketball Association Commissioner David Stern, who oversaw explosive growth in the popularity of the game during his 30-year tenure, died on Wednesday at the age of 77, the league said.

Former National Basketball Association Commissioner David Stern, who oversaw explosive growth in the popularity of the game during his 30-year tenure, died on Wednesday at the age of 77, the league said.

Stern, the NBA's longest-serving commissioner before being succeeded by Adam Silver on February 1, 2014, had been in serious condition after emergency surgery on December 12 in New York following a sudden brain haemorrhage.

"Every member of the NBA family is the beneficiary of David’s vision, generosity and inspiration," Silver, who worked with Stern for 22 years, said in a statement.

"Because of David, the NBA is a truly global brand."

Under Stern, the NBA experienced extraordinary growth, with seven new franchises, including expansion to Canada in 1995, a more than 30-fold increase in revenue, a dramatic gain in national TV exposure and the launch of the Women's National Basketball Association and NBA Development League.

He also had a role in many other initiatives that helped shape the league, including a drug policy, salary-cap system and dress code.

"Without David Stern, the NBA would not be what it is today," former Chicago Bulls superstar and current Charlotte Hornets owner Michael Jordan said in a statement.

"He guided the league through turbulent times and grew the league into an international phenomenon."

Stern's greatest accomplishment as commissioner is widely considered to be the way he transformed the NBA, once largely an unknown commodity outside the United States, into a globally televised powerhouse.

Under Stern's leadership, the league opened 13 global NBA offices and became in 1990 the first US professional sports league to stage a regular-season game outside North America, when the Phoenix Suns played the Utah Jazz in Japan.

"David Stern was the most important non-player/non-coach who ever passed through the NBA and it’s not really close," Bill Simmons, broadcaster and author of "The Book of Basketball: The NBA," said on Twitter.

David Stern was the most important non-player/non-coach who ever passed through the NBA and it’s not really close. Out of everyone he probably loved the league the most. It’s a sad day. RiP.

"David Stern earned and deserved inclusion in our land of giants," the National Basketball Players Association added in a statement.

Current Los Angeles Lakers star, LeBron James, a three-time NBA champion, praised Stern for changing the lives of so many young adults, and "more importantly your vision to make our game become worldwide, a vision only you could make happen."

Bill Russell, who won 11 championships in 13 years with the Boston Celtics long before Stern became commissioner, said in a tweet: "He changed so many lives. David was a great innovator and made the game we love what it is today. This is a horrible loss."

Another retired NBA star, Shaquille O'Neal, called Stern: "The best commissioner to ever do it."

"We lost a legend," said Germany's Dirk Nowitzki, a 14-time all-star with the Dallas Mavericks.

Asked to name his most cherished courtside moment, Stern, in a 2014 interview with the New York Times, pointed to a photograph of him presenting Magic Johnson with the most valuable player trophy at the 1992 All-Star Game, months after Johnson retired from the Los Angeles Lakers on disclosing he had contracted the virus that causes AIDS.

The 1992 "Dream Team" the first US Olympic men's basketball squad to include active players from the NBA - was another special moment.

"This much-maligned group of players and sport, on the march to the gold medal stand, being feted like a combination of the Bolshoi, the Philharmonic and the Beatles," Stern said.

Johnson remembered that journey on Wednesday: "When David allowed me to play in the 1992 All Star Game in Orlando and then play for the Olympic Dream Team, we were able to change the world," he said on Twitter.

Stern also presided over four NBA lockouts, including two that resulted in shortened seasons in 1998-99 and 2011.