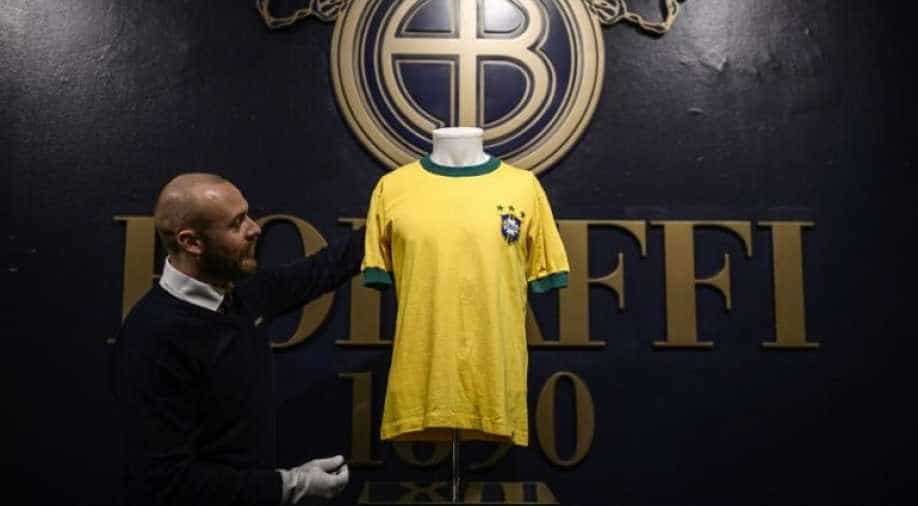 A staff member displays a jersey of Brazilian football legend Pele, during a preview of Sport Memorabilia items, at the Bolaffi auction house in Turin, Italy.  Photograph:( AFP )

The Number 10 jersey was worn by the footballer in his final match for Brazil in a friendly against Yugoslavia at the Maracana Stadium in Rio de Janeiro in July 1971.

Legendary footballer Pele's last Brazil jersey was sold for 30,000 euros in an auction in Italy.

The Number 10 jersey was worn by the footballer in the final match for Brazil in a friendly against Yugoslavia at the Maracana Stadium in Rio de Janeiro in July 1971.

The three-time World Cup winner is regarded as one of the greatest footballers of all time with a reported career total of 1,283 goals, out of which 77 were for Brazil in 92 appearances.

The Brazilian football superstar who retired in 1977, transformed the sport forever when he scored 101 goals in 1965 alone and still holds the highest scoring record for Brazil.

The jersey was the highlight of the event at the Bolaffi auction house in Turin on Thursday.

Italian cycling star Fausto Coppi's yellow jersey that was worn by him on his way to victory in the 1952 Tour de France was also put under the hammer and was sold for 25,000 euros.

Other sporting memorabilia included a rare blue Juventus jersey that worn by Italian defender Luciano Spinosi in the final of the 1971 UEFA Cup which sold for 9,400 euros.

Another jersey that was worn by Argentina legend Diego Maradona sold for 7,500 euros. The jersey was of Maradona's time playing for Napoli in the 1989-90 season.

A bat used by US basketball great Michael Jordan during his brief foray into baseball fetched 425 euros.