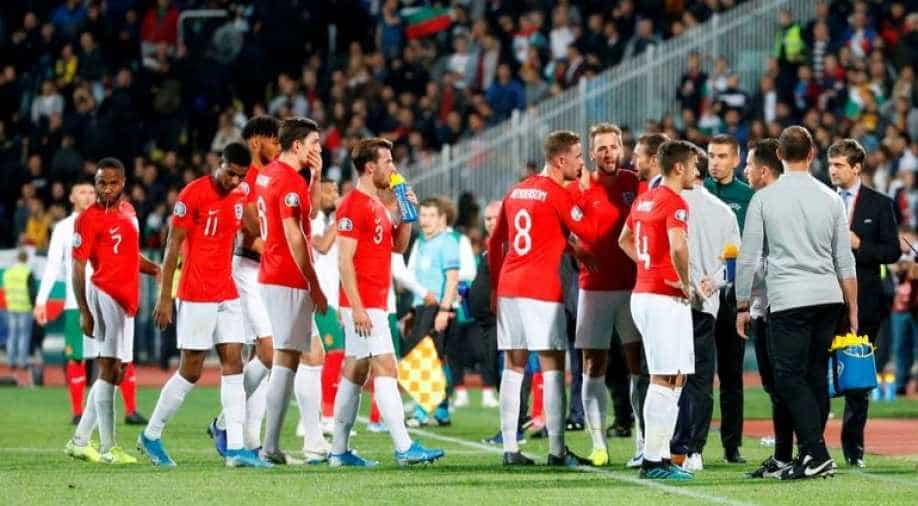 The game was twice halted in the first half, first when England manager Gareth Southgate informed the UEFA delegate about incidents and a public announcement was made.

Anti-racism organisation Kick It Out has criticised European football's governing body UEFA for failing to abandon Monday's Euro 2020 qualifier in Bulgaria after England's black players were subjected to monkey chants.

The game was twice halted in the first half, first when England manager Gareth Southgate informed the UEFA delegate about incidents and a public announcement was made.

The abuse continued and the Group A match, which England went on to win 6-0, was again temporarily suspended by the referee under a three-step UEFA protocol for tackling abuse.

UEFA said it would announce possible disciplinary proceedings later on Tuesday or on Wednesday once it had received full reports from match officials.

Around 50 black-clad Bulgarian fans, some of whom were seen making Nazi salutes, left the stadium before halftime and the second half was completed without further stoppages.

Kick It Out said it was "sickened by the disgusting racist abuse" and suggested UEFA should have taken stronger action.

"We are encouraged that the protocol was initially enforced by the match officials, but UEFA must explain why players weren't sent to the dressing room during Step Two, as is clearly stated in the rules," a statement read.

"TV footage also clearly shows that racist abuse continued in the second half, so it is unacceptable that Step Three was not enforced. This match should have been abandoned by the officials.

"It's now time for UEFA to step up and show some leadership. For far too long, they have consistently failed to take effective action."

The first step of UEFA's protocol was enacted after 28 minutes when England defender Tyrone Mings was subjected to abuse and an announcement was made calling on supporters to stop using racist chants.

The second step, according to UEFA's protocol, is for the players to be sent to the dressing rooms for a specified period.

This was never implemented in Sofia although UEFA said there had been a discussion with the England bench after the second incident and they had agreed to continue as it was so close to halftime.

Step three, according to UEFA, is "after consultation, abandon the match if the discriminatory behaviour still does not cease or breaks out again."

UEFA is yet to comment officially on the incidents.

The threat of racism had dominated the buildup to the game and part of the stadium was empty after UEFA punished Bulgaria for racist behaviour by fans during June's qualifiers against the Czechs and Kosovo.

Bulgarian supporters also made monkey chants at visiting black players when England last travelled to Sofia for a European qualifier in 2011, prompting UEFA to fine the Bulgarian Football Union (BFU) $44,072.

Kick It Out said the punishments were futile.

"The fact Bulgaria are already hosting this game with a partial stadium closure for racist abuse shows that UEFA's sanctions are not fit for purpose," it said.

"There can be no more pitiful fines or short stadium bans. If UEFA care at all about tackling discrimination - and if the Equal Game campaign means anything - then points deductions and tournament expulsion must follow."