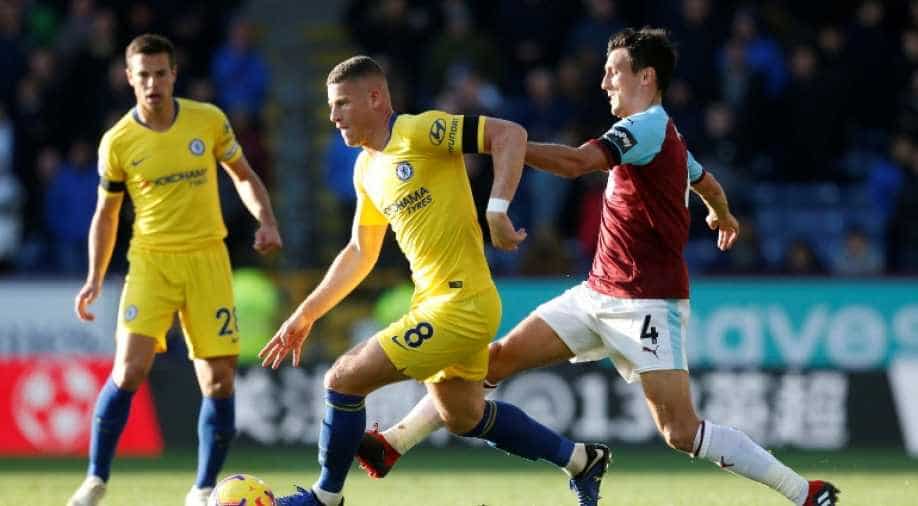 Chelsea are two points behind leaders Liverpool and one point ahead of champions Manchester City.

Chelsea went second in the Premier League with an emphatic 4-0 win at Burnley on Sunday which maintained their unbeaten start to the season.

The London club are two points behind leaders Liverpool and one point ahead of champions Manchester City, who play away to Tottenham Hotspur on Monday.

Maurizio Sarri's side barely noticed the absence of Eden Hazard as Willian, starting in the Belgian's normal position on the left, scored and hit a post.

Spanish striker Alvaro Morata gave Chelsea the lead midway through a first half in which he might have netted three times.

England midfielder Ross Barkley set him up for that goal and added the second himself from outside the penalty area early in the second half.

"For 10 minutes it was difficult at the beginning but then we played very well," said Sarri, who became the first Chelsea manager to go unbeaten in his first 10 league games in charge.

"I am very happy for Alvaro Morata and Loftus-Cheek again.

"At the end, everything is OK. We played very well in full control of the match for the last 80 minutes."

"We started very well and then we give away a poor goal from our point of view," he said.

"It was a top side doing what top sides do, they finish clinically.

"We have played two top sides back to back in City and Chelsea, who have delivered top performances and it's hard to deal with that. We aren't a million miles away."

Former England goalkeeper Joe Hart conceded nine goals in the last two games but there was little he could do to repel some fine Chelsea finishing.

Hart had made one fine save from Morata's header and seen Willian's drive hit a post before the first goal.

Barkley and Willian's goals were particularly well taken as Chelsea clocked up 24 goals from their 10 games. Only City with 26 have more.