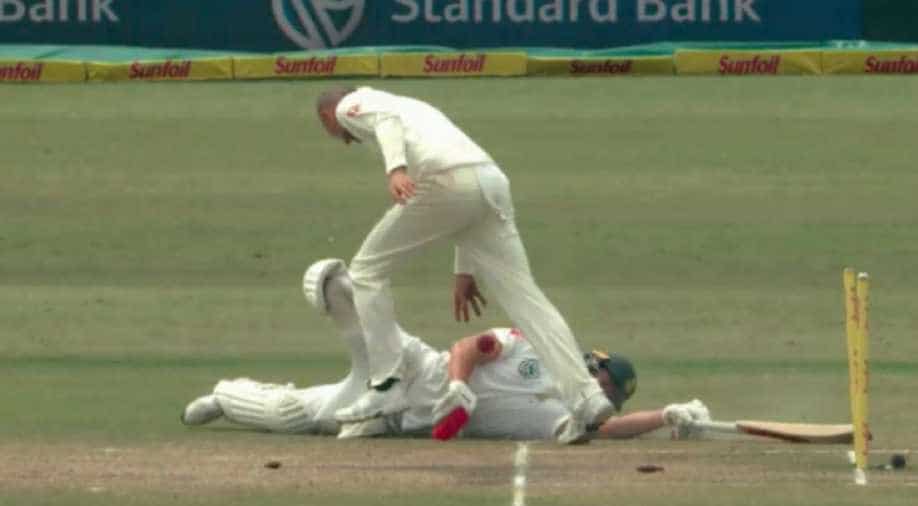 Nathan Lyon throwing the ball at AB de Villiers when he dived to save his wicket. Photograph:( Twitter )

Australian off-spinner Nathan Lyon has been charged 15 percent of his match fee for his cheeky celebration following the run out of South Africa batsman AB de Villiers by the International Cricket Council (ICC). He threw the ball at former South African skipper AB de Villiers which is declared as a breach of level one of its code of conduct as behaviour that was "contrary to the spirit of the game". Nathan has had one demerit point added to his name. A total of four such demerit points will result in him missing a Test match.

If I was an #Australian or part of the #Australiancricket team I would be #ashamed. The #derro #NathanLyon clearly throws the ball on AB and #DavidWarner acts like an absolute #bogan that he is #maniac #AUSvsSA #badsportsmen #disgrace# pic.twitter.com/6Cb8LMGXGs

The incident occurred on the fourth day in the second innings of the first Test match at the Kingsmead Stadium in Durban on Sunday. De Villiers was run out for nought after being involved in a mix-up with opening batsman Aiden Markram, with Lyon, who had knocked off the bails, dropping the ball towards the sprawled batsman as he ran over to join ecstatic celebrations.

Nathan Lyon has been fined after breaching the ICC Code of Conduct during the first Test against South Africa.

The bowler was said to have apologised to De Villiers and the pair were seen shaking hands while the teams warmed up on Monday.

It didn't take too long for Australia to wrap up victory on day five of the first Test against South Africa.#SAvAUS REPORT ➡️https://t.co/j4xPRt027s pic.twitter.com/VbuB8q2eWd