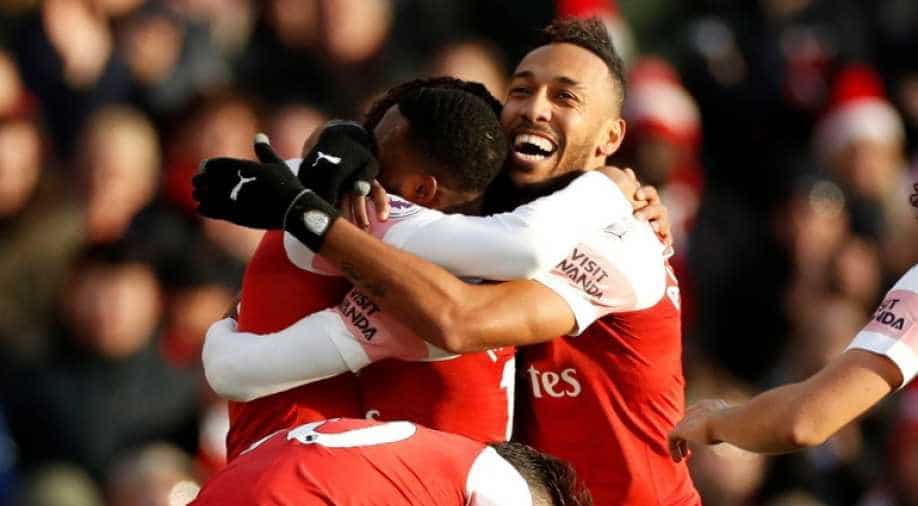 Arsenal forward Pierre-Emerick Aubameyang shot to the top of the Premier League scoring charts with two goals in Saturday's 3-1 home win over struggling Burnley, returning his side to winning ways after two straight defeats.

The Gabon forward gave Arsenal the lead in the 14th minute, knocking in a pass from Sead Kolasinac after a classy ball from Mesut Ozil. He then smashed high into the net in the 48th to complete an impressive counter-attack from Unai Emery's side.

Burnley, 18th in the table and without an away win since September, hit back with a scrappy goal from Ashley Barnes having spurned a good chance to take an unlikely lead at the start of the game when Ashley Westwood was denied by the feet of Arsenal goalkeeper Bernd Leno.

Substitute Alex Iwobi restored Arsenal's two-goal cushion with a simple finish in stoppage-time, helped by another clever move from German playmaker Ozil, who was left out of the team for Wednesday's 2-0 League Cup defeat by Tottenham Hotspur.

Aubameyang's brace moved him on to 12 goals for the season, leapfrogging Liverpool's Mohamed Salah as the league's top scorer and taking fifth-placed Arsenal on to 37 points, level with Chelsea who play Leicester City later.

Arsenal's 22-game unbeaten run in all competitions was halted on Sunday with a 3-2 defeat at Southampton and they were knocked out of the League Cup at the quarter-final stage with a painful home loss to north London neighbours Tottenham.