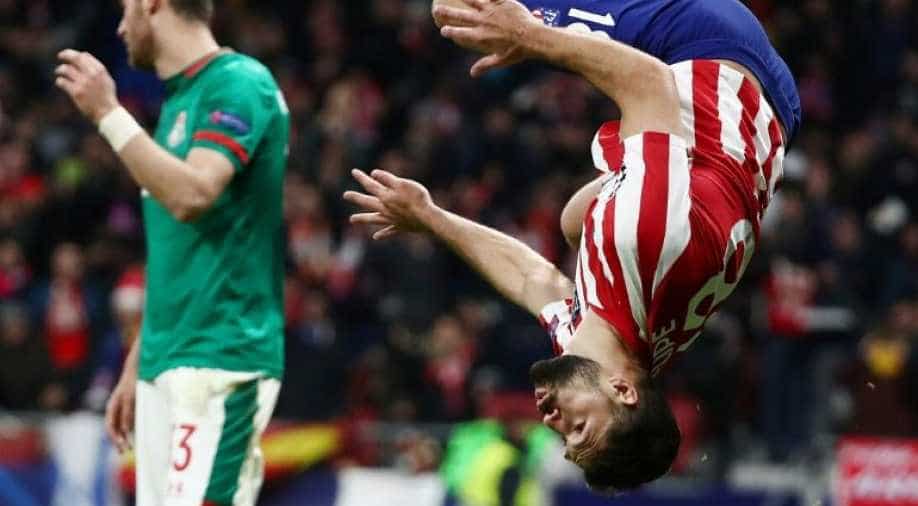 The victory meant Atletico finished second in Group D with 10 points behind Juventus who ended on 16 by winning 2-0 at Bayer Leverkusen.

Atletico Madrid comfortably beat Lokomotiv Moscow 2-0 at home on Wednesday to end a barren run of four games without a win and advance to the knockout stage of the Champions League for the sixth time in seven years.

Club record signing Joao Felix calmly converted a penalty to put Diego Simeone's side ahead in the 17th minute after Kieran Trippier had squandered an opportunity from the spot, while defender Felipe made sure of the win with a volley in the 54th.

The victory meant Atletico finished second in Group D with 10 points behind Juventus who ended on 16 by winning 2-0 at Bayer Leverkusen.

"We had gone too long without winning and we're glad to finally be able to celebrate with our supporters," Atletico captain Koke told reporters.

"From the start, we tried to take the game to them and went looking for a goal and this time we were able to score a couple."

Atletico had a slender lead of one point over Leverkusen heading into their final match and only a victory would guarantee they remained in Europe's top competition, which they narrowly missed out on winning in 2014 and 2016.

It seemed a simple enough task except for the fact Atletico had won only one of their previous eight games in all competitions and had failed to score in their last three outings despite firing 50 shots at goal.

They got off to an ideal start as they were awarded a penalty with the game less than a minute old when Portugal forward Felix shuffled into the area and was felled by visiting goalkeeper Anton Kochenkov.

England defender Trippier chose power over placement and Kochenkov beat the shot away with his left hand, but Atletico were not discouraged by the early mishap and earned a second penalty for a handball after a VAR review.

Felix, their 126-million-euro signing, sent Kochenkov the wrong way from the spot and Atletico rarely looked back, eventually sealing the win through Felipe's goal after Morata had an effort chalked off for offside after a VAR review.

"We really needed a victory like this because we have been playing well recently but our results have not been good," added Koke.

"We're going to be a difficult opponent for anyone in the next round."