Martinez fires Inter top of Serie A as Juventus slip up 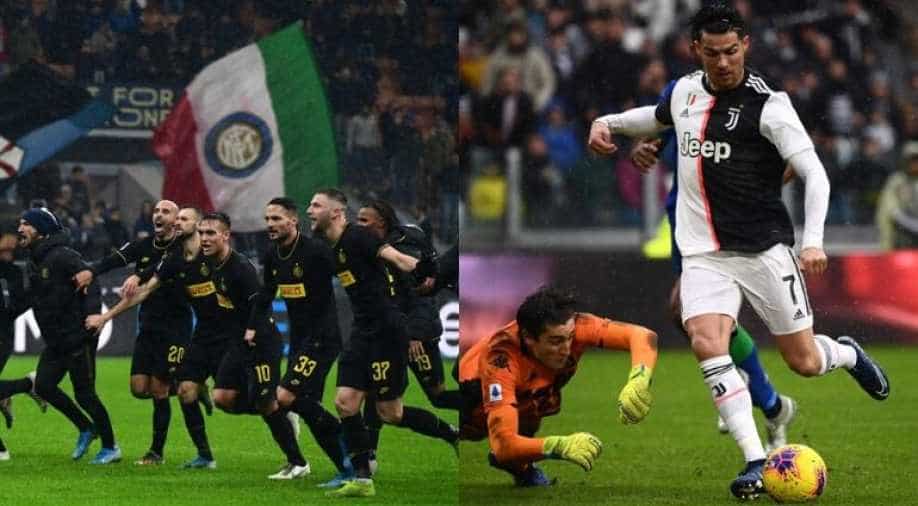 Cristiano Ronaldo scored from the spot to rescue a 2-2 draw but Juventus slipped one point behind Antonio Conte's Inter.

Lautaro Martinez's first-half brace sent Inter Milan top of Serie A on Sunday with a 2-1 win over SPAL after champions Juventus were held at home by Sassuolo.

"We didn't use our heads," lamented Juventus boss Maurizio Sarri after his side dropped their first points at home this season.

Cristiano Ronaldo scored from the spot to rescue a 2-2 draw but Juventus slipped one point behind Antonio Conte's Inter.

Argentinian Martinez put Inter ahead on 16 minutes at the San Siro, and then headed in Antonio Candreva's cross to score his eighth league goal this season.

Mattia Valoti pulled a goal back, but second-from-bottom SPAL fell to their ninth defeat of the campaign.

Conte has guided Chinese-owned Inter to 12 victories in 14 league games for the first time, and they reclaimed the top spot which they had previously held until their 2-1 defeat by Juventus on October 6.

"When a team like Juventus drops points, you need to make sure that you make the most of that," said former Juve coach Conte.

In Turin, Leonardo Bonucci struck early for the eight-time reigning champions but Ivorian Jeremie Boga and Francesco Caputo hit back for Sassuolo before Ronaldo's intervention.

Sassuolo, in 12th, claimed their first ever point at Juventus, and held Sarri's unbeaten champions to their third draw this season.

"We got into trouble on our own, we didn't use our heads in the first half, as the goals conceded show," said Sarri.

"But we were coming off two games in which we used up a lot of energy against Atalanta and Atletico Madrid. We woke up after going behind."

Veteran Gianluigi Buffon endured a nightmare in the Juventus goal.

The 41-year-old was making just his fifth start this season, putting him two short of Paolo Maldini's record of 647 Serie A appearances.

Boga dinked the first Sassuolo goal on 22 minutes over the onrushing Buffon, who then fumbled in Caputo's second after the break following a mix-up between Juan Cuadrado and Matthijs de Ligt.

By contrast, 18-year-old Stefano Turati made an impressive debut in the Sassuolo goal, and pulled off a string of fine saves, denying a Ronaldo free-kick, Gonzalo Higuain and Paulo Dybala late on.

It was the Portuguese star's fifth Serie A goal this season, with the five-time Ballon d'Or winner also having an effort ruled out for offside.

"Ronaldo has regained stamina, the next step will be to recover brilliance, but the road is right," insisted Sarri.

Lazio consolidated third place, seven points behind Inter, with a 3-0 win over Udinese thanks to a double from Serie A top scorer Ciro Immobile, including one from the spot, to bring his tally to 17 goals this season, and a Luis Alberto penalty.

Roma moved up to fourth, two points behind their city rivals, after a 3-1 win at midtable Verona, ahead of Cagliari, who host Sampdoria on Monday.

Justin Kluivert score after 17 minutes in Verona with Diego Perotti converting a penalty just before the break, and Henrikh Mkhitaryan adding a third in injury time.

But Napoli's winless run stretched to eight games in all competitions with a 2-1 defeat at home by Bologna, leaving last season's runners-up in seventh.

Bologna got their first win since October 27 with coach Sinisa Mihajlovic back on the bench following a bone marrow transplant as he fights leukaemia.

Despite taking a point in their Champions League game at Liverpool in midweek Carlo Ancelotti's Napoli are five points off the top four.

"It's a very delicate time for us," said Ancelotti.

Fernando Llorente put Napoli ahead four minutes before half-time, but Dane Andreas Skov Olsen volleyed in an equaliser just before the hour with Nicola Sansone scoring the winner 10 minutes from time.

Llorente thought he had scored a 95th-minute leveller, but it was ruled offside by VAR.