Arsenal bounce back with 4-1 win over Fulham 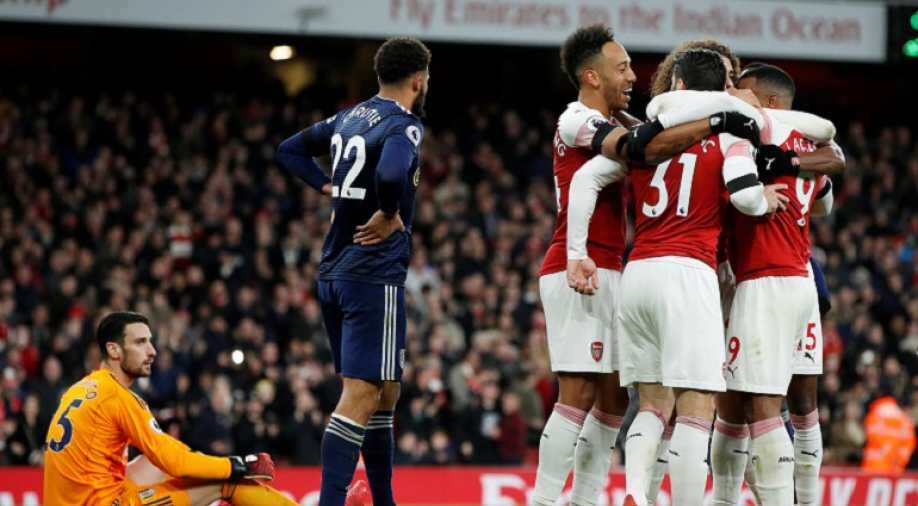 The Gunners had been shaken by a 5-1 thrashing from leaders Liverpool on Saturday that exposed their defensive frailty, and that weakness was evident again in the early stages.

Arsenal returned to winning ways on Tuesday with a 4-1 victory over struggling Fulham at the Emirates Stadium that moves them within two points of fourth-placed Chelsea.

The Gunners had been shaken by a 5-1 thrashing from leaders Liverpool on Saturday that exposed their defensive frailty, and that weakness was evident again in the early stages.

Fulham's highly rated youngster Ryan Sessegnon twice missed opportunities to put Fulham ahead - bursting through the Arsenal defence but firing wide, and then completely mis-kicking when Andre Schurrle found him unmarked inside the box.

Arsenal's nerves were eased in the 25th minute when Granit Xhaka struck after collecting a chip into the box from Alex Iwobi on his chest, turning and slotting home.

Alexandre Lacazette made it 2-0 in the 55th minute, converting after Sead Kolasinac pulled the ball back from the byline after some excellent team passing.

Aboubakar Kamara pulled one back for Claudio Ranieri's Fulham in the 69th minute and the Cottagers could have drawn level when Aleksandar Mitrovic forced a good save out of Arsenal keeper Bernd Leno.

But Aaron Ramsey added a third for Arsenal, finding the target after Pierre-Emerick Aubameyang's effort came out off the post.

Aubameyang then wrapped up the win with a diagonal shot from the right which took a slight deflection.

The win was only the second in six games for Arsenal but, as Xhaka noted, it was a much-needed one after the torment of Saturday's loss.

"After a bad game against Liverpool, we want to show a good game and to improve. Fulham have a new coach and a good team. We were a bit nervous at 2-1, but 4-1 makes us happy," he said.

Fulham remain deep in relegation trouble in 19th place in the 20-team league, with just 14 points from 21 games.

Ranieri said his team had paid the price for failing to take their chances and for tiring later in the game.

"When you play against the big teams you have to make the calculations very fast. I will show this to the players, and we work better than we have been working," he said.

The Italian hinted he may look to strengthen his team in the January transfer window, which opened on Tuesday.

"Maybe it's something we have to do. I will speak to the owner.

"I'm very, very pleased with my players. If we have the chance to buy some good players then (that's) welcome," he said.