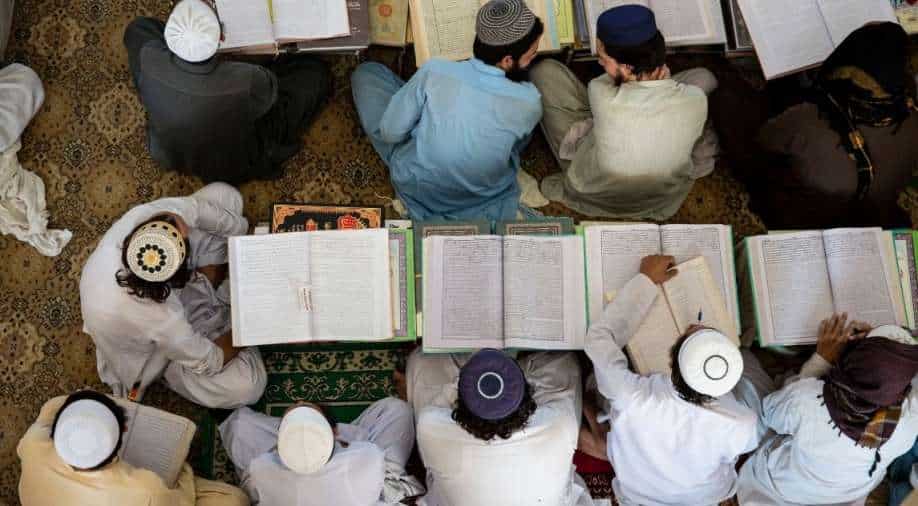 Darul Uloom Haqqania madrassa, one of Pakistan’s largest and oldest seminaries, has educated more Taliban leaders than any school in the world

The Taliban have seized Afghanistan, and this school could not be prouder.

Darul Uloom Haqqania madrassa, one of Pakistan’s largest and oldest seminaries, has educated more Taliban leaders than any school in the world. Now its alumni hold key positions in Afghanistan.

The school’s critics call it a university of jihad and blame it for helping to sow violence across the region for decades. And they worry that extremist madrassas and the Islamist parties linked to them could be emboldened by the Taliban’s victory, potentially fueling further radicalism in Pakistan despite that country’s efforts to bring more than 30,000 seminaries under greater government control.

The school says it has changed and has argued that the Taliban should be given the chance to show they have moved beyond their bloody ways since they first ruled Afghanistan two decades ago.

“The world has seen their capabilities to run the country through their victories on both the diplomatic front and on the battlefield,” said Rashidul Haq Sami, the seminary’s vice chancellor.

A Taliban softening is far from assured, given a surge of violence earlier this year, reports of reprisal killings inside the country, limits on girls going to school and clampdowns on free expression. But Sami argued that the Taliban takeover could have been even bloodier, signaling that they “would not repeat the mistakes of the 1990s.”

Darul Uloom Haqqania, about 60 miles from the Afghan border, has had an outsize effect there. The seminary’s alumni founded the Taliban movement and ruled Afghanistan in the 1990s. Pakistan’s powerful military often uses its leaders to influence the Taliban, experts say.

Its late chancellor, Samiul Haq, who was murdered at his residence in Islamabad in 2018 and was Sami’s father, was known as the “father of the Taliban.”

“Being the alma mater of scores of Taliban leaders, Haqqania certainly commands their respect,” said Azmat Abbas, author of “Madrassa Mirage: A Contemporary History of Islamic Schools in Pakistan.”

Sirajuddin Haqqani, 41, who led much of the Taliban’s military efforts and carries a $5 million bounty from the U.S. government on his head, is the new acting interior minister of Afghanistan and an alumnus. So is Amir Khan Muttaqi, the new foreign minister, and Abdul Baqi Haqqani, the higher education minister.

The justice minister, the chief of the Afghan water and power ministry, and a variety of governors, military commanders and judges also passed through the Haqqania seminary, school administrators say.

“We feel proud that our students in Afghanistan had first broken the Soviet Union and now sent the U.S. packing,” Sami said. “It is an honor for the madrassa that its graduates are now ministers and hold high positions in the Taliban government.”

Many of the alumni adopt the name Haqqani as a symbol of pride. The Haqqani network — the Taliban’s military wing, responsible for hostage-taking of Americans, complex suicide attacks and targeted assassinations — is named after the madrassa and retains connections there.

More than 4,000 students, mostly from poor families, attend the sprawling seminary, a collection of multistory concrete buildings in a small riverside town just east of the city of Peshawar. Courses range from the memorization of the Quran to Arabic literature.

On a recent visit, a scholar delivered a lecture on Islamic jurisprudence to a packed hall of 1,500 final-year students. They burst into giggles at one instructor’s jokes. Other students lined up outside for lunch and played volleyball or cricket.

Among them, the Taliban victory is a source of great pride.

“The Taliban have finally defeated the U.S. after struggling for almost 20 years, and the entire world accepts this fact,” said Abdul Wali, a 21-year-old student. “It also shows the farsightedness and commitment of our teachers and former alumni about Afghanistan.”

Wali praised Haqqania as a premier place to memorize the Quran, which some Muslims believe will get them and their families into heaven. “Haqqania is one of the few prestigious madrassas in the country where students consider studying an honor because of its history, the prominent scholars teaching there and its quality Islamic education,” he said.

Pakistan has long had an uneasy relationship with madrassas like Haqqania. Leaders who once saw the seminaries as a way to influence events in Afghanistan now see them as a source of conflict within Pakistan. The country has its own Taliban movement, the Pakistani Taliban, or TTP, which has been responsible for a slew of violent attacks in recent years. The two sides reached a cease-fire this month.

Renewed signs of radicalism in madrassas have appeared, especially since the fall of Kabul, Afghanistan. Students have held pro-Taliban rallies. At the Red Mosque in Islamabad, the site of a deadly raid by security personnel 14 years ago, Taliban flags were raised above a girls’ madrassa next door.

Meanwhile, the usefulness of the madrassas has declined, as Pakistani officials have more recently taken a more direct role in Afghanistan’s affairs, said Muhammad Israr Madani, an Islamabad-based researcher focusing on religious affairs.

Amid those pressures, Pakistan’s government has tried a mix of financial support and behind-the-scenes prodding to dial down radicalism within the seminaries.

The government of Prime Minister Imran Khan gave the Haqqania seminary $1.6 million in 2018 and $1.7 million in 2017 for “mainstreaming” it. The funds helped the madrassa construct a new building, a badminton court and a computer lab, among other projects.

Haqqania has broadened its curriculum to include English, math and computer science. It demands full documentation from foreign students, including those from Afghanistan, and administrators said it adopted a zero-tolerance policy for anti-state activities.

Experts on education in Pakistan say that the effort has had some success and that Haqqania does not advocate militancy like it once did.

Still, they said, such madrassas teach a narrow interpretation of Islam. Lessons focus on how to argue with opposing faiths rather than critical thinking, and stress enforcement of practices like punishing theft with amputation and sex outside marriage with stoning. That makes some of their students vulnerable to recruitment from militant groups.

“In an environment of widespread support for the Taliban, both with the government and society, it would be naive to hope that madrassas and other mainstream educational institutions would adopt a teaching approach other than a pro-Taliban one,” said Abbas, the author.

The school’s syllabus may be less influential than individual instructors.

“Whenever a madrassa student is found engaged in an act of violence, the wider approach is to hold the madrassa system and its syllabus responsible for the ill, and no attention is paid to the teacher or teachers who influenced the student,” Abbas said.

Graduates who had studied at Haqqania in the 1980s and 1990s said they did not receive any military training. Some, however, said teachers often discussed jihad openly and encouraged students to join Afghanistan’s insurgency. One, named Ali, said students could easily slip into Afghanistan to fight during seminary vacations. He requested that only his last name be used, citing security concerns.

Sami, the vice chancellor, said students were neither trained for combat nor obliged to fight in Afghanistan.

School administrators point to recent statements by some groups in Afghanistan as reflective moderate teachings. After the Taliban captured Kabul, the Jamiat-e-Ulema Islam-Sami party, founded by Sami’s father, urged them to ensure the safety of Afghans and foreigners, particularly diplomats; protect the rights of religious and ethnic minorities; and allow women access to higher education.

In any case, Sami said, the world has little choice but to trust the Taliban’s ability to govern.

“I advise the international community to give a chance to the Taliban to run the country,” he said. “If they are not allowed to work, there will be a new civil war in Afghanistan, and it will affect the entire region.”