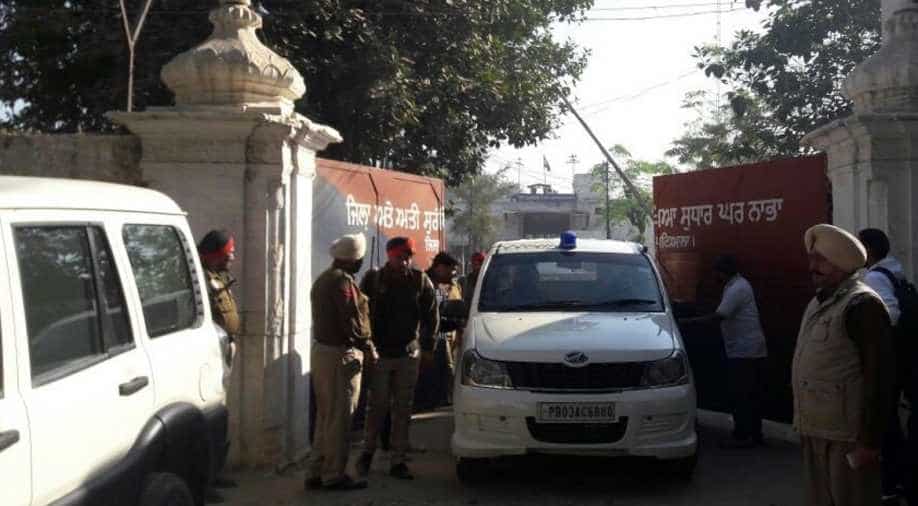 The four other gangsters who were freed during the operation are Gurpreet Singh, Vicky Gondra, Nitin Deol and Vikramjeet Singh. Photograph:( ANI )

A suspect has been arrested after ten gunmen stormed into a jail in India's Punjab state on Sunday morning.

Police say the accused, identified as Parminder, has confessed to his involvement in the crime.

The suspect was nabbed from Shamli, a small town in north India and roughly 170 kilomtres from Nabha Jail.

Police have found a huge cache of weapons from the impounded car.

One person (Parminder) arrested in connection with Punjab jailbreak, huge cache of arms recovered from his car in Shamli, UP pic.twitter.com/zNKHK5LweU

On Sunday morning, ten men wearing police uniforms fired over 100 rounds at jail authorities as they stormed into the premises.

Apart from Mintoon, the five other convicts who were freed during the operation are Gurpreet Singh, Vicky Gondra, Nitin Deol, Vikramjeet Singh and Kashmira Singh, alos a terrorist, PTI reported.

Mintoo, a noted terrorist wanted in 10 cases, including the 2008 attack on Sirsa-based Dera Sacha Sauda chief, was arrested by Punjab police from Delhi's IGI airport on November 2014 when he was on his way back from Thailand.

The 47-year-old was also accused of planting explosives at Halwara Air Force station near Ludhiana in 2010.

Mintoo took over the KLF in 2009 after he had defected from Wadhawa Singh-led Babbar Khalsa International (BKI).

This is the most audacious attack by Khalistani terrorists in Punjab in the last two decades.

A manhunt has been launched to trace the prisoners who escaped, and a special task force has been formed to track them, the state's deputy chief minister Sukhbir Badal said.

A high alert had been sounded in Punjab with security around railway stations, airports, inter-state bus terminals and other places of key importance stepped up, officials told PTI.

Neighbouring states -- Haryana, Himachal Pradesh, Uttarakhand, Jammu and Kashmir, Uttar Pradesh and Delhi -- have also been put on high alert as police believe that Mintoo might have decided on his hideout beforehand to evade getting caight.

The federal government has sought a report from the state government asking it provide details of the incident.

The Punjab government has also announced a reward of Rs 25 lakh to any person providing information leading to the arrest of the prisoners.

Sukhbir Badal said Pakistan could be behind the jailbreak since it was desperate to revive terror in the state after India's surgical strikes against terrorist launchpads across the Line of Control (LoC) in September.