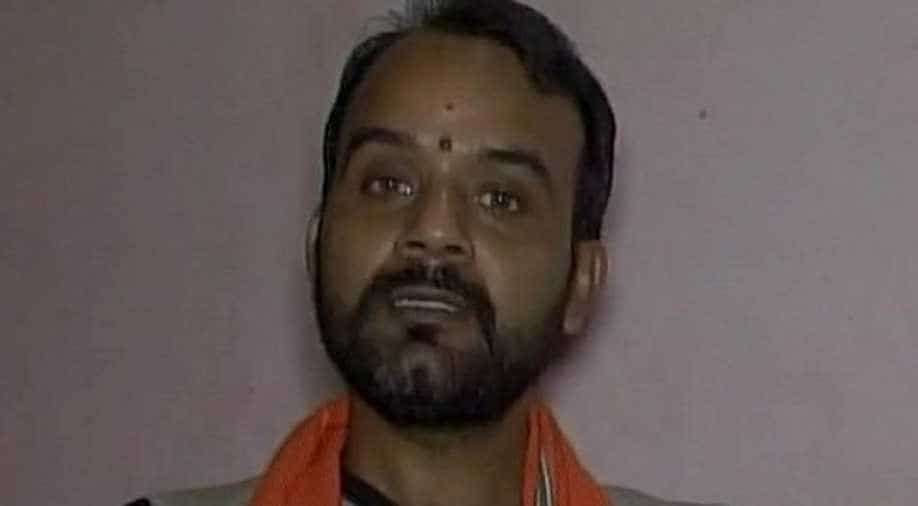 Deepak Sharma said film stars beat up villains to send out a message. He was trying to do the same thing with his 'film'. Photograph:( ANI )

Deepak Sharma said in his defence that in Bollywood films, superstars like Shah Rukh Khan and Salman Khan thrash the culprit, but there is a message in that, he too was trying to deliver a similar message

The Uttar Pradesh resident, who was accused of kidnapping and beating up a boy for allegedly making memes of gods and goddesses, on Wednesday clarified on his intent behind the viral video and said that it was filmed to show what could happen if one hurts religious sentiments of people.

The person by the name Deepak Sharma had posted a video on his Facebook page which went viral all over social media within no time.

Talking exclusively to ANI, Sharma, in his defence, said that in Bollywood films, superstars like Shah Rukh Khan and Salman Khan thrash the culprit, but there is a message in that, and going by that, he too was trying to deliver a similar message.

"My name is Deepak Sharma and I am from Rashtriya Swabhiman Dal. In the video, I had already mentioned the heading as "A Film". I do not have to explain here what a film means. If you watch that video clearly, then you will come to know that it was filmed to show that if you post such demeaning things on the internet, then it hurts the sentiments of the society and in turn, you will have to face the consequences. I haven't mentioned his name, then how can people jump to the conclusion that he is a Muslim," Sharma said.

"I haven't only talked about Hindu religion; I have included every religion in that context. It has been seen in 'the film' that people will have to face the repercussion of their behaviour if they harm the sentiments of the society. I do not understand how a person can be arrested for making a video," he asserted.

"The film stars are not arrested for spreading such messages. I have put the heading of the video as 'A Film', so I don't think the police will have any kind of discomfort with that. A sane person will understand what I have been trying to show in that video," he added.

Sharma further said that posting explicit pictures of gods and goddesses in any religion is unacceptable.

Deepak has claimed himself to be a Hindu leader from Jaipur and has gained over 30,000 followers with his stunt.

This is not for the first time that the internet has noticed him. A while back, a video surfaced where he was seen boasting about his educational qualifications and income with his noteworthy 'English speaking skills'.

The authentication of Sharma's claim has not been verified yet.

For the uninitiated, resorting to violence and then, making and posting such videos can lead him to be booked under several relevant penal sections.