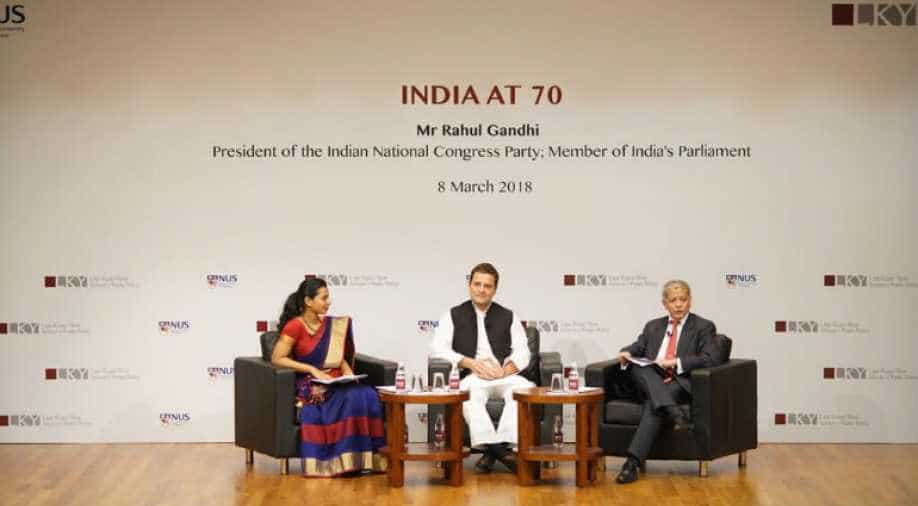 Rahul Gandhi at India At 70 event in Singapore on Thursday. Photograph:( Twitter )

An innocuous conversation at an event in Singapore has become one of the most talked about in India. Singapore-based author Prasenjit K Basu asked Congress president Rahul Gandhi about India's poor growth rate during Congress rule at a discussion during 'India At 70' event at Lee Kuan Yew School of Public Policy in Singapore.

The Congress president questioned Basu's hypothesis, after which the author delved into history. Basu claimed Rahul Gandhi was stumped and repeatedly failed to answer his question.

Here’s the full video of my succinct question to RaGa, and his repeated failure to answer: https://t.co/DVLLUzLbrH

A video of same event was later uploaded by Congress on its Twitter handle, and the party claimed its president handled the situation maturely. At the end of the video, Gandhi even invites Basu for a hug.

However, this did not go well with Basu who threatened to sue Congress for what he claimed was a fake news video.

This is a classic fake-news video. You are using my image to falsely advertise your politician, showing a sequence of events that did not occur. Withdraw this false video, or prepare for prosecution in Singapore’s courts!

Thanks for posting the full video of the interaction. @INCIndia has posted a fake-news video, deleting RaGa’s repeated failure to answer the question (instead mixing my question with the next sycophantic question). And clearly the party doesn’t understand “per capita income”!

Singapore became developed country in less than 15 years. While India continue to be developing from 60 years of INC rule

The fact that you are a well educated education man, speak-read-write in English, is all because of @OfficeOfRG ‘s great grand father. That’s the Nehru-Gandhi family’s great legacy. Remove the Modi blinkers and then you can see what RG’s family has contributed to India.