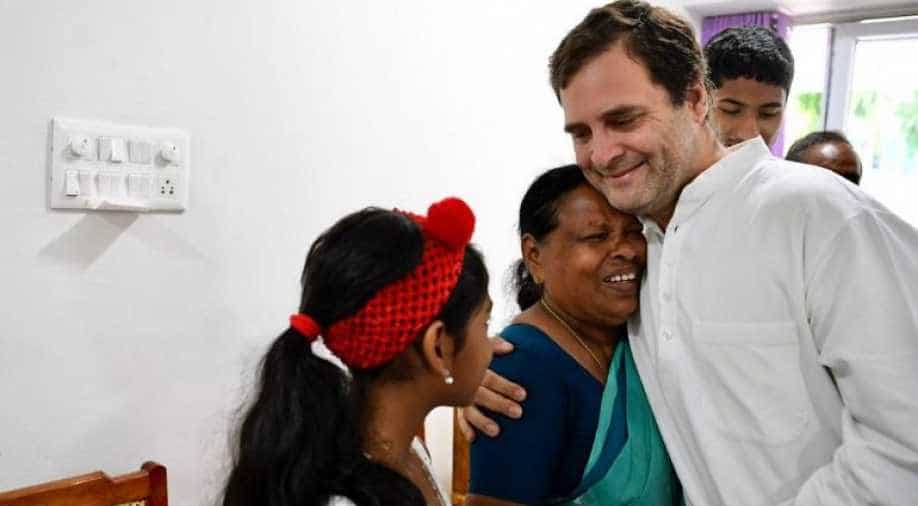 Congress President Rahul Gandhi meets a nurse who was on duty when he born at PWD rest house at Kalpetta in Wayanad. Photograph:( ANI )

Vavathil could not contain her happiness and excitement at meeting Gandhi, whose birth she had witnessed, as a grown-up man and the Member of Parliament from her Wayanad constituency in Kerala.

It was a special moment for 72-year-old Rajamma Vavathil, a retired nurse when Congress president Rahul Gandhi hugged and held her hand here on Sunday, 49 years after she took him in her hands like a newborn at a Delhi hospital.

Vavathil could not contain her happiness and excitement at meeting Gandhi, whose birth she had witnessed, as a grown-up man and the Member of Parliament from her Wayanad constituency in Kerala.

The Gandhi scion hugged her and held her hand when Vavathil and her family came to meet him at a guest house here in the morning.

Amidst his busy schedule, Gandhi, on a Thanksgiving visit to Wayanad, which has sent him to Parliament this time with a massive victory margin of 4.31 lakh votes, spent some time with Vavathil's family.

Besides, the Congress chief obliged some party workers and their kin by posing for photographs with them.

As a trainee nurse, Vavathil had taken care of Gandhi at Delhi's Holy Family Hospital after his birth on June 19, 1970.

The Congress chief also greeted Vavathil's family members, including her husband and grandchildren, who waited for hours to meet him.

When Vavathil recalled her memories of witnessing his birth and taking him in her hands like a newborn, Gandhi listened to her attentively with a smile on his face.

Before leaving, Vavathil gifted home-made jackfruit chips and sweets to the Congress chief, who, in turn, promised to meet her again.

An excited Vavathil later said she was really happy to meet Gandhi after all these years.

"I am really happy and excited. I was the first among the few who took Rahul as a newborn in their hands. All those memories gushed through my mind when I met him again," she told reporters.

"I felt, I should give him some gift. That is why I gave him sweets and chips made by myself," the retired nurse said.

When the controversy over Gandhi's citizenship came up during the Lok Sabha election campaign, Vavathil had said she was one of those who were on duty at the Holy Family Hospital on June 19, 1970, when the Congress chief was born.

She had also said she was among the first few to take newborn Rahul in her hands.

"I was lucky as I was the first among the few who took the newborn in their hands. He was so cute. I was witness to his birth. I was thrilled...We all were thrilled to see the grandson of (then) prime minister Indira Gandhi," Vavathil had said.

Rahul Gandhi's father Rajiv Gandhi and uncle Sanjay Gandhi were waiting outside the labour room of the hospital when his mother Sonia Gandhi was taken for delivery, she had recounted.

Vavathil, who completed her nursing course from the Holy Family Hospital, later joined the military as a nurse.

After taking voluntary retirement from service, she returned to Kerala in 1987 and is now settled in Kalloor, near Sulthan Bathery in Wayanad.