Need to think about Unlock 2.0: PM Modi to chief ministers 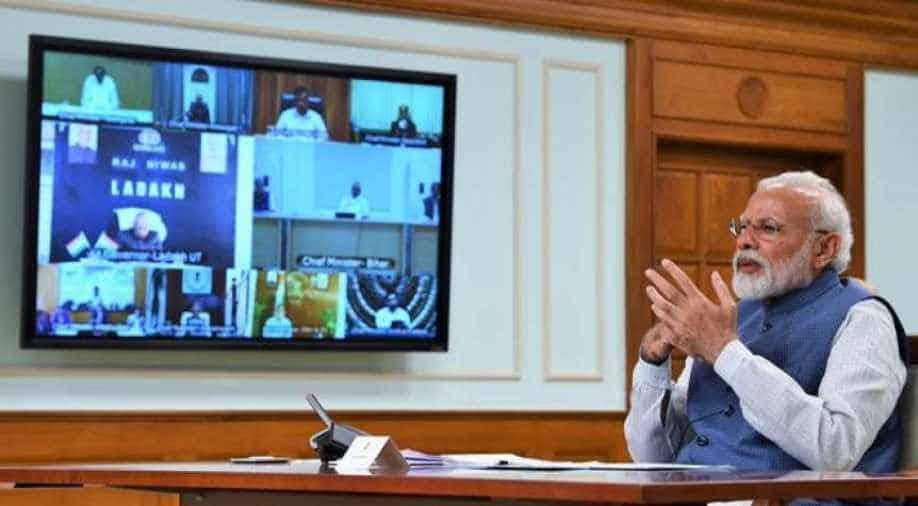 He noted that with reduced restrictions, indicators of economic performance are showing signs of revival.

The indicators of economic performance are showing signs of revival following the reduction in restrictions imposed during the coronavirus lockdown, Prime Minister Narendra Modi said on Wednesday as he told chief ministers to think about 'Unlock 2.0' and also ways to minimise infection.

He noted that the spread of COVID-19 is more in a few big states and cities and urged the chief ministers to make full use of their state's existing testing capacity and also work to augment health infrastructure.

He said there was a need to "fight" rumours that the lockdown could be reimposed.

Speaking to chief ministers and representatives of 14 states and the union territory of Jammu and Kashmir, Modi said big crowds, lack of physical-distancing, daily movement of large number of people and small houses in some cities have made the battle against coronavirus "more challenging".

This was the second day of Modi's sixth round of consultations with chief ministers on fighting the COVID-19 pandemic.

Saving lives should be the top priority, he said, and called for expanding health infrastructure, according to a statement.

He underlined the need to "fight rumours of lockdown", pointing out that the country is now in the "phase of unlocking".

"We need to now think about phase 2 of Unlock and how to minimise all possibilities of harm to our people," he said according to the statement.

He noted that with reduced restrictions, indicators of economic performance are showing signs of revival.

Inflation has also been kept under control and asked states to take steps to boost infrastructure and construction-related activities.

In a word of caution, Modi referred to the rise in the number of infections and underscored the need for testing, tracking, tracing and isolating COVID-19 patients to deal with the pandemic.

There has been criticism that some states and cities, including Delhi, are not doing enough testing.

The prime minister, however, stated that the number of recovered patients has also been rising, and added that it is a matter of relief that very few patients needed ICU and ventilator care.

Citing the details of the boost in capacity to deal with the virus, he asked states to continue to put emphasis on "health Infrastructure, information systems, emotional support and public participation".

Praising efforts of states and local administration, he said the country now has more than 900 COVID-19 testing labs, lakhs of special beds, thousands of isolation and quarantine centres, adequate stocks of testing kits, with over one crore personal protective equipment (PPEs) and almost same numbers of N-95 masks supplied to states.

Despite a rise in coronavirus cases in a few places, people's patience, administration's work and dedication of corona warriors have ensured that things did not go out of control, he said.

Stressing on the importance of providing timely information, the prime minister said it should be ensured that helplines are not "helpless" but helpful for people.

He called for building teams of senior doctors and young volunteers to guide patients through telemedicine and run helplines, respectively.

Modi also called for fighting the stigma associated with the disease, saying people should be assured that there is no need to panic if somebody has been infected as the number of those cured is huge.

He highlighted the need to keep reminding people of the benefits of sanitisation, wearing masks and social distancing to fight the virus.

He asked states to share their best practices with each other.

An officer on special duty in the Union Health Ministry told the participants that there has been a continuous decline in growth rate of cases during the phases of lockdown and subsequently also in Unlock 1.0.

The OSD also informed that the number of cases and deaths per lakh of population in India are amongst the lowest in the world.

During the interaction, the chief ministers talked about health infrastructure available to meet the challenge and steps taken to strengthen it further.

They also spoke about the support provided to frontline workers, monitoring in containment zones, campaigns to encourage usage of masks and other safety precautions, increase in testing, and providing gainful employment opportunities to the migrants who have returned.

Home Minister Amit Shah, who also took part in the virtual meeting, said the country has so far been quite successful in the fight against the virus.

He, however, cautioned that the "battle is far from over".

Shah underlined that as the country begins to unlock, people must stay vigilant.

He requested all the chief ministers to encourage the download of Aarogya Setu app to act as a "self-shield" for protection.

Continuing with his consultations with state governments on ways to check the spread of coronavirus during 'unlock 1.0', Modi held a consultation with the chief ministers for the second consecutive day.

Chief ministers of Maharashtra, Delhi, Karnataka, Gujarat, Uttar Pradesh and Bihar were among those who attended the meeting on Wednesday.

It assumed importance as some of these states account for a majority of the cases in the country.