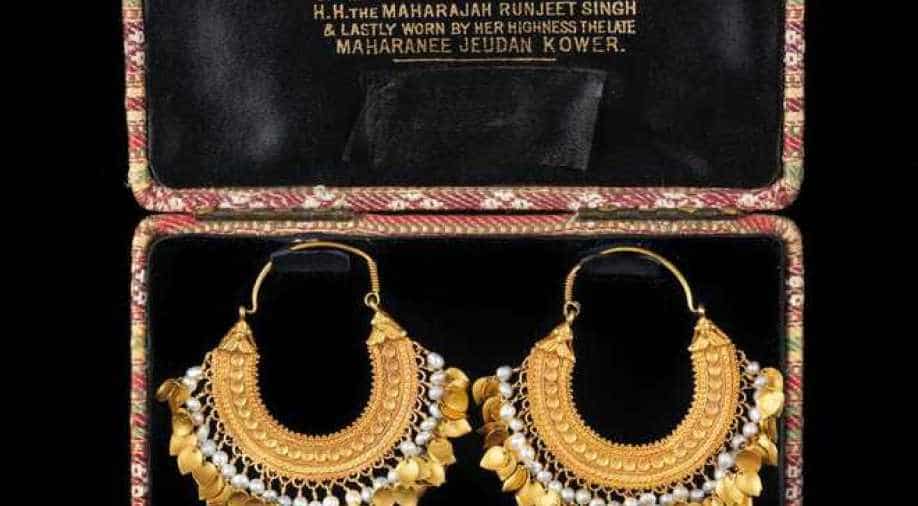 A pair of gold pendant earrings from the collection of last Sikh Queen of Punjab Maharani Jind Kaur fetched 175,000 pounds, nearly six times the guide price, at an auction here.

The earrings, the highlight of the Islamic and Indian sale at Bonhams yesterday, were estimated to attract bids between 20,000 and 30,000 pounds.

The earrings belonged to the youngest wife of Maharaja Ranjit Singh, who was the only wife of the Sikh ruler not to commit sati on his funeral pyre following his death in 1839.

She went on to be appointed as the de facto ruler of Punjab before being captured by the British. It was only many years later when she arrived in England that her jewellery, including the earrings on sale, were handed back to her.

“The impressive price paid for these beautiful pieces of jewellery conveys their significance,” said Oliver White, Head of Islamic and Indian Art at Bonhams.

“These gold earrings are a powerful reminder of a courageous woman who endured the loss of her kingdom, and persecution and privation, with great dignity and fortitude,” he noted.

When Kaur’s five-year-old son Duleep Singh was proclaimed Maharaja of Punjab in 1843, she was appointed Regent.

The Punjab Empire at the time stretched from the Indian Ocean to the Himalayas and the court was fabled for its artistic and scientific achievements and opulence and riches.

The East India Company invaded and annexed Punjab, despite armed opposition organised and led by Kaur. She was deposed in 1846, separated from her son and imprisoned.

According to Bonhams’ historians, the Maharani’s personal wealth was confiscated and the state Treasury plundered by the British Army.

The famous Koh-i-Noor diamond and the Timur Ruby were sent back to London as gifts for Queen Victoria. Mother and son were eventually reunited after 13-and-a-half-years in 1861 when Kaur moved to England to be with her son. She died in 1863.

Besides her earrings, some of the other Indian highlights of the Bonhams auction this week included a painting by Gujarati artist Ghulam Mohammed Sheikh.

His ‘Composition in green and black’ inscribed on the reverse with the artist’s name sold for 40,000 pounds, within the guide price estimate of 35,000 and 45,000 pounds.

Another Indian painting, dating back to circa 1820-30, ‘Shiva and Parvati with Ganesh, Karttikeya and Nandi on Mount Kailasa’ went under the hammer for 16,250 pounds, beyond the estimated 8,000-12,000 pounds.