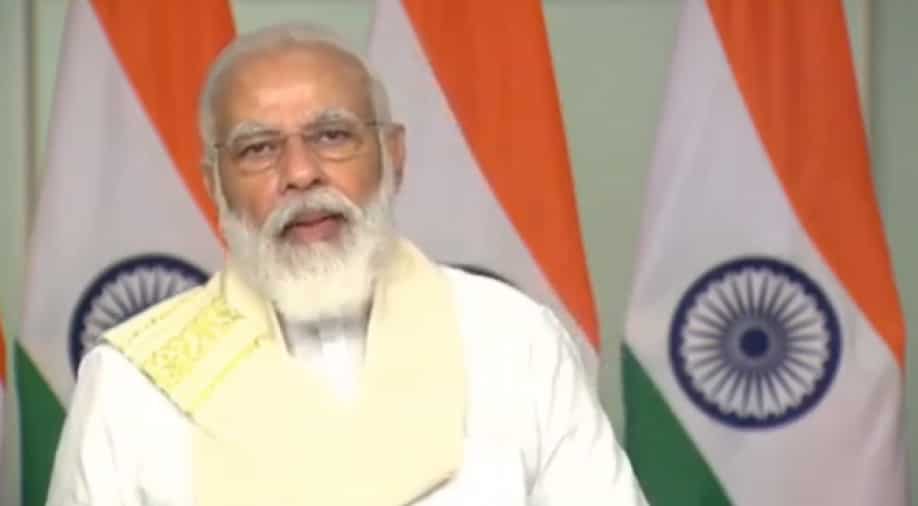 India is considering investing Rs 10,000 crore for building a transhipment port at Great Nicobar Island in the Bay of Bengal to provide shippers with an alternative to similar ports in the region, Prime Minister Narendra Modi said on Monday as he inaugurated the first undersea optical fibre project to provide high-speed internet to Andaman and Nicobar Islands.

The 2,312-kilometre-long submarine optical fibre cable from Chennai to Andaman and Nicobar Islands, laid at a cost of Rs 1,224 crore, will provide "better and cheaper connectivity", Modi said.

"There is a proposal to build a transhipment port at Great Nicobar at an estimated expenditure of about Rs 10,000 crore. Large ships can dock once this port is ready," he said at the inauguration ceremony held through video link.

The dedicated container transshipment terminal at the strategic port locale in the Andaman and Nicobar Islands along the Bay of Bengal coastline offers two geographical advantages -- proximity to the busy east-west international shipping route that can facilitate shorter transits and greater economies of scale, and deep natural water depths that can accommodate the latest generation of mega-ships.

The transshipment port would enable big ships to anchor and raise India's share in maritime trade as well as create new job opportunities, he said.

The Andaman and Nicobar Islands Administration had last year floated an expression of interest for the container transshipment terminal with the Free Trade Warehousing Zone in South Bay, Great Nicobar Island to provide Indian shippers an alternative to Colombo, Singapore and Port Klang (Malaysia) transshipment ports.

The Prime Minister said Andaman & Nicobar will be developed as a hub of port-led development as it is at a competitive distance from many ports of the world.

As India looks to establish itself as an important player in global supply and value chain, it is very important to strengthen the network of waterways and ports, he said adding legal bottlenecks in the development of port infrastructure are also being removed continuously.

The government's focus, he said, is also on promoting ease of business and simplifying maritime logistics.

He referred to in-principal approval being given for building a deep draft greenfield seaport on the west coast and work starting on a deep draft inner harbour on the east coast.

While blue economy like fisheries, aquaculture, and seaweed farming will accelerate the development of Andaman and Nicobar, the government is making efforts to have more facilities at the Islands.

The undersea cable will help boost tourism as it will provide better mobile and internet connectivity on the Islands, he said.

"From Chennai to Port Blair, Port Blair to Little Andaman and Port Blair to Swaraj Dweep, this service has started in large part of Andaman Nicobar from today," Modi said adding it will boost 4G mobile services and digital services like tele-education, telehealth, e-governance services and tourism on the Islands.

According to official data, an internet speed of 400 gigabytes (Gb) per second will be provided at Port Blair and for other islands, it will be 200 Gb per second.

Undersea cable linking the Andaman and Nocobar Islands with Chennai was laid before time despite the difficult situation, Modi said.

The work of laying undersea cable has been executed by BSNL in a record time of less than 24 months.

Besides mobile and internet connectivity, physical connectivity through road, air, and water is also being strengthened, he said referring to two big bridges and widening of National Highway No.4 being undertaken to improve road connectivity between North and Middle Andaman.

He said the Port Blair Airport is being enhanced to handle a capacity of 1,200 passengers. Along with this, the airports are ready for operations in Diglipur, Car Nicobar, and Campbell-Bay.

Seaplane services will start once water aerodrome infrastructure including passenger terminal and floating jetty is ready at Swaraj Dweep, Shaheed Dweep, and Long Island, he said adding four ships being built at Kochi Shipyard shall be delivered soon to improve the water connectivity between the islands and the mainland.

The Prime Minister said that when India is moving forward with the resolve of self-sufficiency and is establishing itself as an important player in the global supply and value chain, it is very important to strengthen our network of waterways and our ports.