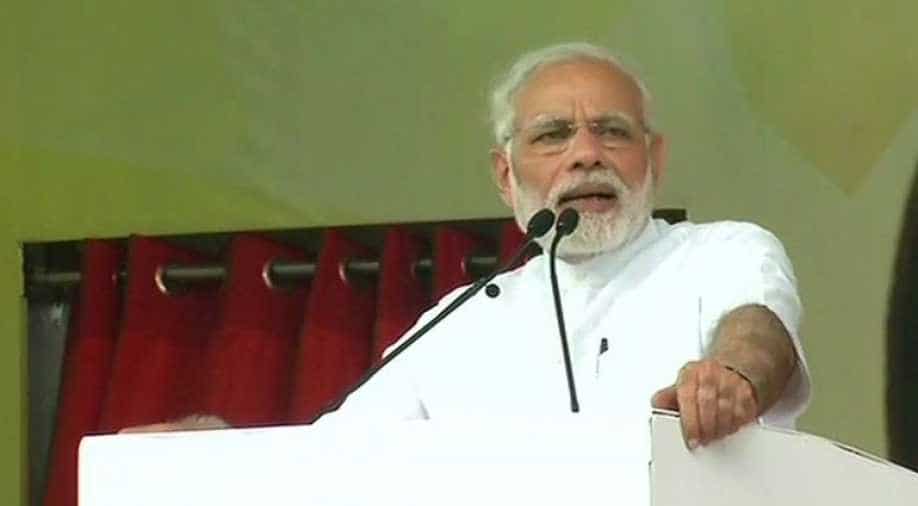 PM Modi addresses a gathering in Sindri, Jharkhand on May 25. Photograph:( ANI )

While addressing a rally in the state's Sindri town, PM Modi said his government was devoting significant resources for the empowerment of the poor, Dalits and the tribal communities.

"Central Government is devoting significant resources for the empowerment of the poor, Dalits and tribal communities. Today, we have laid the foundation stone for five big projects. The total cost of these projects is Rs 27,000 crore," PM Modi said.

Terming Jharkhand as a land of "courage", the Prime Minister said the state and the Centre have been working hand-in-hand from past four years for the progress of the state and empowerment of the people.

PM Modi, along with Jharkhand's Chief Minister Raghubar Das, will also lay the foundation of All India Institute of Medical Sciences (AIIMS) at Deoghar.

The prime minister said that the establishment of AIIMS in Jharkhand will transform the healthcare sector in the state.

Tracing back the achievement of the National Democratic Alliance (NDA) after assuming power, PM Modi said it was his government who made the electricity available to 18,000 villages of the country.

He further said they aim to make electricity available to every household in India.

"We worked to brighten the lives of people in these villages and took electricity there," the prime minister said.

He assured that soon the fertiliser plants, which had stopped working, will be revived, which will benefit Eastern India.

Jharkhand will also get around 250 medical centres across the state.