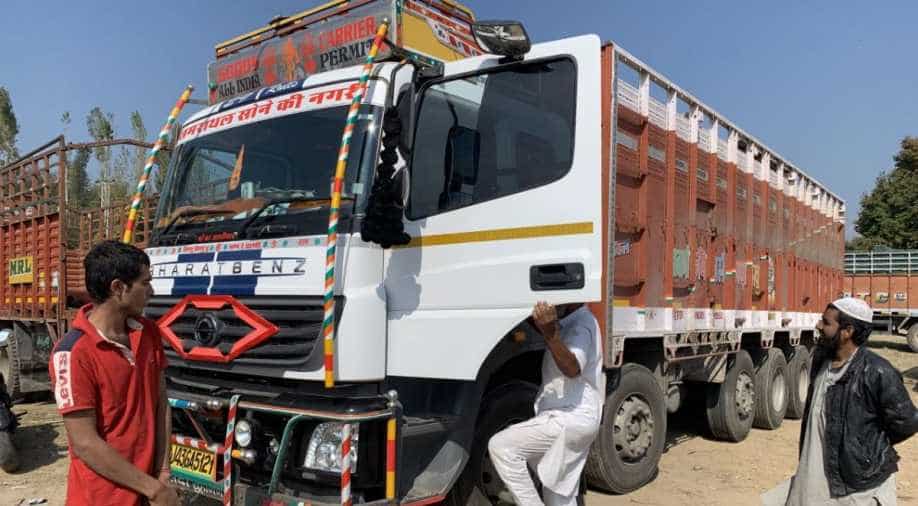 Authorise believe that the attacks on non-local residents are being carried out to hurt the Apple business. Photograph:( WION )

On Thursday night, terrorists opened fire on two drivers and injured one critically near Chittargam village in Shopian district, mostly known for its Apple production.

The slaying of two truck drivers from Rajasthan who were killed by terrorists in South Kashmir’s Shopian has created an atmosphere of fear among the non-local truck divers in the valley.

In south Kashmir, according to truck drivers, around 100 trucks have left without loading apples after reports emerged about the murder of the truck drivers.

On Thursday night, terrorists opened fire on two drivers and injured one critically near Chittargam village in Shopian district, mostly known for its Apple production.

“We are afraid but we also have to do our work because our families are dependent on the income we get from driving these trucks,” said Irfan Pathan, a driver from Rajasthan.

Ilyas Khan and Zahid Khan from Rajasthan died on the spot while Jeevan Singh sustained bullet injury for which he is undergoing treatment at a hospital in Srinagar.

“Every driver wants to leave Shopian and go home,” says Mohammad Ilyas, a truck driver from Uttar Pradesh, who was loading apples in his truck.

The government has already created ‘safe zones’ for Apple traders and drivers after the killing of a truck driver Sharief Khan in a similar fashion on October 14 by two terrorists. After killing Sharief, terrorists also killed a Punjab-based apple trader Charanjeet Singh and leaving his colleague Sanjeev injured.

“We have made secure zones to realign trucks in our district. We wanted all our growers to reach these zones to load apples in trucks. This was also done to provide them security,” said Yasin Choudhary, deputy commissioner Shopian.

Authorise believe that the attacks on non-local residents are being carried out to hurt the Apple business and also to create fear in the valley. The drivers who have been transporting apples outside the valley say that they have never been fearful in Kashmir before.

“These trucks had gone on the interiors of Shopian and were out of our sight. We have motivated drivers to continue and local people have also come forward for this”, said Yasin Choudhary, deputy commissioner Shopian.