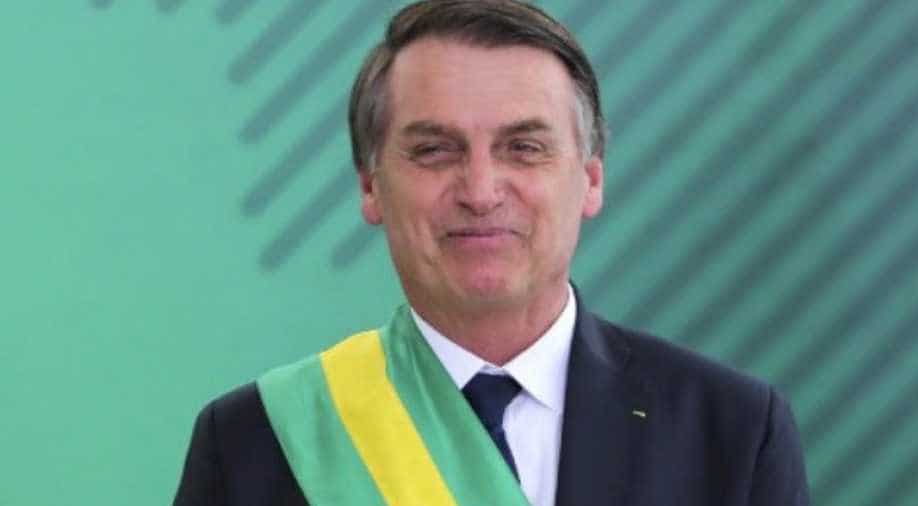 Bolsonaro, during his first visit to India after assuming power, will be the chief guest at India's 71st Republic Day Parade on January 26, besides holding talks with Prime Minister Narendra Modi and President Ram Nath Kovind.

Brazilian President Jair Bolsonaro will arrive in India on a four-day visit beginning Friday with an aim to "re-energise" the bilateral strategic partnership by boosting trade and investment, and deepening cooperation in key sectors such as defence and energy.

Bolsonaro, during his first visit to India after assuming power, will be the chief guest at India's 71st Republic Day Parade on January 26, besides holding talks with Prime Minister Narendra Modi and President Ram Nath Kovind.

Asked why a "controversial" figure like Bolsonaro was chosen to be the chief guest at the Republic Day parade, Secretary (East) Vijay Thakur Singh said he is an elected leader in a democratic country which is an emerging power in the region and one with which India has strong and substantive relations.

"We will be warmly welcoming him as an honoured guest to the Republic Day and it (his coming here) is a sign of his commitment to building the relationship between the two countries," she said at a media briefing.

Brazilian envoy Andre Aranha Correa do Lago to India earlier told PTI over 15 agreements will be signed during the Brazilian president's visit, including one on the investment protection and facilitation treaty.

Thakur said there would be discussions on cooperation in key sectors such as defence, energy, trade and agriculture.

"Coming to the energy sector, which is the area in which we have collaboration both oil and gas as well as in the renewable energy side, including in the field of Bio-fuels... We could have an exchange of knowledge as well as technology in this field," Thakur said.

Other areas which will be the focus of discussion during the visit will be agriculture, food processing and animal husbandry, Thakur said.

"So, if you look at it, the visit of President Bolsonaro is an extremely important visit. It will be an opportunity to re-energise our strategic partnership and take it forward in a focused manner. And, we have a very positive and forward-looking agenda to building stronger ties with Brazil," she said.

President Bolsonaro will be accompanied by eight ministers, four members of the Brazilian Parliament, senior officials and a large business delegation, she said.

This will be the third time that a Brazilian President will be the Chief Guest at the Republic Day.

The last time there was a Brazilian president as chief guest was in 2004.

India-Brazil ties have been on an upswing in the last few years.

The volume of bilateral trade was $8.2 billion in 2018-19. This included $3.8 billion worth of Indian exports to Brazil and $4.4 million as imports by India. Both the governments feel there is huge potential to enhance the bilateral trade further.

Brazilian investments in India are mainly in the automobile, IT, mining, energy and biofuels sectors. India has invested in Brazil's IT, pharmaceutical, energy, agri-business, mining and engineering sectors.

The two countries signed an agreement in 2003 for defence cooperation. It was ratified by Brazil in 2006. The agreement provides for cooperation in defence-related matters, especially in the field of research and development, acquisition and logistic support.

Both the countries are also strong contenders for permanent membership of the UN Security Council.

Prime Minister Modi met Bolsonaro on the sidelines of the G20 Summit in Osaka in June last year during which a raft of issues of bilateral importance were discussed.