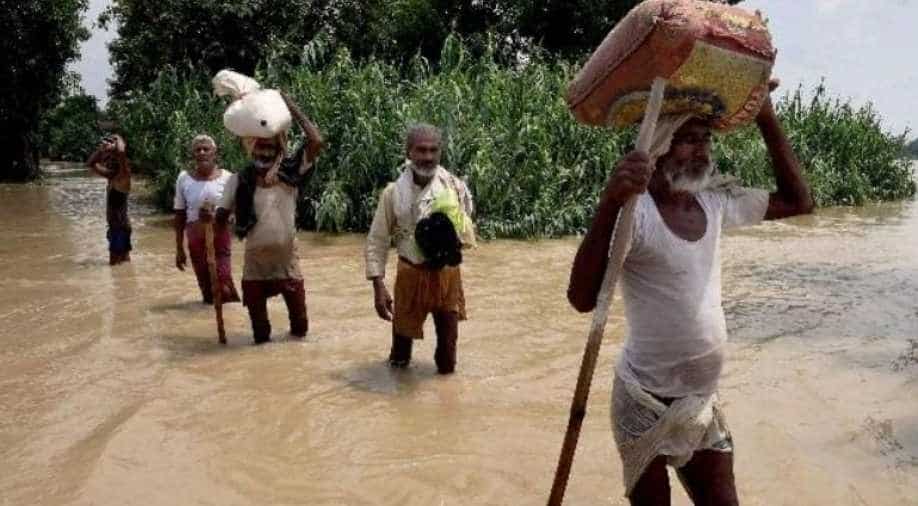 The number of people affected by the deluge has gone up by 4.62 lakh since Saturday, though that of the district remained at 14, the department said in a bulletin.

The flood situation in Bihar worsened on Sunday as water from overflowing rivers inundated fresh areas, while a total of 53.67 lakh people across 14 districts were affected, the Disaster Management Department said in Patna.

No fresh casualty was reported and the number of people who died in flood-related incidents stood at 13.

The number of people affected by the deluge has gone up by 4.62 lakh since Saturday, though that of the district remained at 14, the department said in a bulletin.

The number of panchayats hit by the calamity, however, rose to 1,059 from 1,043 on the previous day.

It said that an embankment of Tirhut canal breached in the early hours of Sunday inundating at least a dozen villages in Muraul block of Muzaffarpur district. Two National Disaster Response Force (NDRF) teams have been deployed at the site.

With 16.89 lakh flood-affected people, Muzaffarpur is the worst-hit district, followed by 12.40 lakh people in Darbhanga and 8.09 lakh in East Champaran.

More than half of the affected populace live in Muzaffarpur and Darbhanga districts.

Of the 13 deaths in flood-related incidents, Darbhanga registered the highest seven casualties, followed by four in West Champaran and two in Muzaffarpur.

A total of 20 teams of the NDRF and 11 of the SDRF are involved in the rescue operations and they have evacuated 4.03 lakh people from the affected areas so far, the bulletin said.

It said that 26,734 people are staying in 19 relief camps while nearly 9.29 lakh people were being fed at 1,385 community kitchens in the affected districts.

Rivers such as Baghmati, Burhi Gandak, Kamlabalan, Adhwara, Khiroi, Mahananda and Ghaghra are flowing above the danger level at various places.

The Met Department has forecast light rain in the catchment areas of all rivers flowing in the state on Monday.